Hamid Mir issues his first statement days after being shot six times by assailants in Karachi. 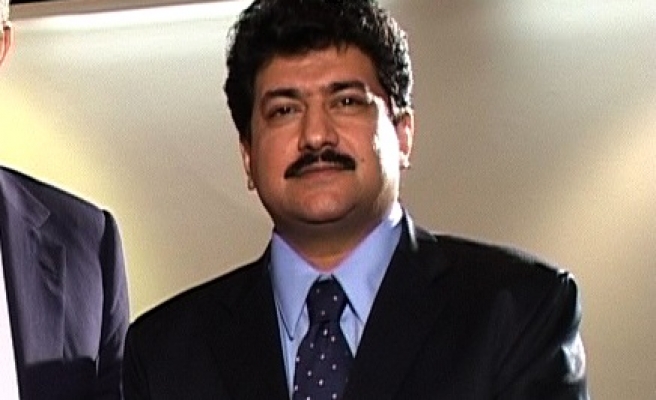 Injured Pakistani journalist and anchor Hamid Mir, who was shot in Karachi by assailants last week, has issued a statement accusing the country's chief intelligence service of being behind the attack.

Mir made his accusation on Thursday in a two-page statement written in Urdu and read out by his younger brother, journalist Amir Mir, at the hospital where he is being treated for injuries caused by six bullets.

“I am bringing this statement to the notice of media despite all the threats and intimidation. You know very well how the Sacred Cow [Pakistan's military] treats those who dare to speak truth,” Amir Mir said before reading the statement.

Mir, who hosts popular talk show Capital Talk on Geo News, the country’s most popular TV channel, said that he had not only informed the Geo management, his family and friends, but also some Inter Services Intelligence (ISI) officials that he had been facing threats from the powerful spy agency.

'I am facing threats'

He said in the statement that he had informed intelligence officials about a threat from ISI at a meeting a few weeks ago at his residence in Islamabad.

“Some intelligence officials came to my residence and informed me that they had captured a hit-list containing my name. However, when I asked them about the people who had prepared that hit-list, they did not give any satisfactory response,” Mir said in the statement.

Mir said the ISI had not been happy with him for giving coverage to the participants of a rally carried out by the families of missing persons from southwestern Baluchistan province, where security forces have been facing a fierce rebellion from Baluch separatists.

He said he was extremely worried about the safety of members of his family and that if anything wrong happened to them, “state actors” and the government would be responsible.

Mir, who rose to fame after interviewing the late al-Qaeda chief Osama bin Laden in 2002 in Afghanistan, questioned what the security agencies had done in connection with an attempt on his life in November 2012, when a bomb planted underneath his car was recovered in Islamabad.

“I ... provided the phone numbers and other details about threats I had been facing, but the Islamabad police expressed its inability to act against the perpetrators,” he added.

Eulogizing the sacrifices of armed forces personnel against terrorism, Mir however said that in the name of patriotism, the army’s illegal role in the country’s politics could not be condoned.

“No one can understand the sacrifices of our armed forces better than a person who has received six bullets in his body. I salute them. But it does not mean that a criminal silence can be observed over an illegal role of the army in politics in the name of patriotism”.

“My fight is for the supremacy of law, democracy, the rights of smaller provinces and for the downtrodden people of Pakistan. And I will continue to fight for that till my last breath, and last drop of blood,” he said.