"It is our earnest wish that Mr. Modi and the newly elected NDA government understand the ardent political message we seek to convey through this act," said Kashmiri leader Mirwaiz Omar Farooq. 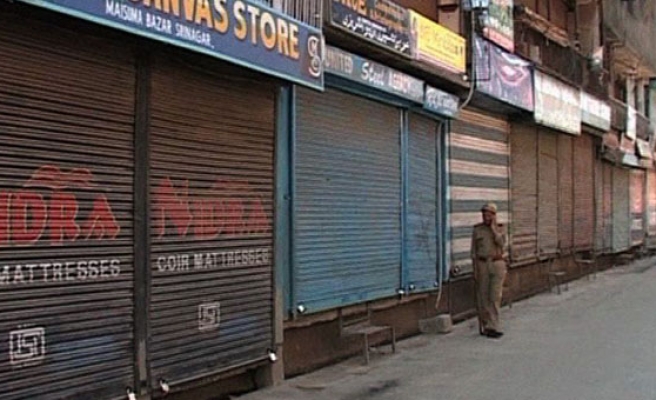 India's Prime Minister Narendra Modi was greeted by near-empty streets lined by security personnel on his first official visit to Kashmir on Friday, as Kashmiri leaders enforced a strike to demand political dialogue about the future of the divided region.

Kashmir is split between rivals India and Pakistan. Demonstrators on the Pakistan side burnt an effigy of Modi and India's tricolour flag on Friday to protest the prime minister's visit.

Schools and shops were shuttered and normally busy roads were free of traffic in Srinagar, the summer capital of Indian occupied Kashmir, when Modi arrived to meet army commanders in one of the most world's most militarised regions.

"It is our earnest wish that Mr. Modi and the newly elected NDA government understand the ardent political message we seek to convey through this act," said Kashmiri leader Mirwaiz Omar Farooq.

Police erected barricades to stop and search vehicles entering Srinagar ahead of Modi's arrival, and soldiers flanked main roads throughout the Himalayan region.

Modi has long been associated with a Hindu nationalist organisation that wants to end the semi-autonomous status that Muslim-majority Kashmir nominally enjoys. His government has promised to renew the debate on the sensitive issue.

Modi was later due to inaugurate a hydroelectric dam in the mountains, barely a mile from the Line of Control, the de facto border dividing Kashmir between India and Pakistan.

The nuclear-armed neighbours have been quarrelling over the region they both claim in full since freedom from British colonial rule in 1947. Hundreds of thousands of troops are stationed along either side of the border, making it a dangerous flashpoint despite a ceasefire that has reduced - but not ended - cross-border firing in recent years.

Many Kashmiris want independence from both India and Pakistan.

"We have repeatedly expressed our hope that the Kashmir issue is addressed in its proper perspective as a political and human issue," said Farooq, who heads a coalition of independence supporters and is seen as close to Pakistan.

On Wednesday night, sporadic fighting broke out in Poonch district along the defacto border, with the Indian army saying they had foiled an infiltration attempt by militants.

"Mr Modi will take with him the gift of bodies of Indian soldiers" from Poonch, said Maulana Abdul Aziz Alvi, a leader in Pakistani Kashmir of the Jamaat ud Dawa, a group under U.S. and U.N. sanctions.

Lieutenant-General K.H. Singh, Commander of the White Knight Corps (16 Corps) in India, said that ceasefire violations and infiltration bids were common before high-profile visits to the state, formally known as Jammu and Kashmir, to draw attention to the region.

Earlier in the day, Modi saw off the inaugural train on a new stretch of railway to the town of Katra, allowing easier access to the a Hindu shrine there that is one of India's most popular pilgrimage sites and receives upwards of 10 million visitors each year.

Modi said the train, in addition to making it easier for pilgrims to reach the shrine, would help connect the state with the rest of India.

"Infrastructure is the centre point of development," Modi said. "My objective is to win the hearts of the people of Jammu and Kashmir through development."