Six dead in fire at Rohingya camp in Myanmar

Global attention has focused on the 720,000 Rohingya Muslims forced from the state's north into Bangladesh last year by a brutal military crackdown. 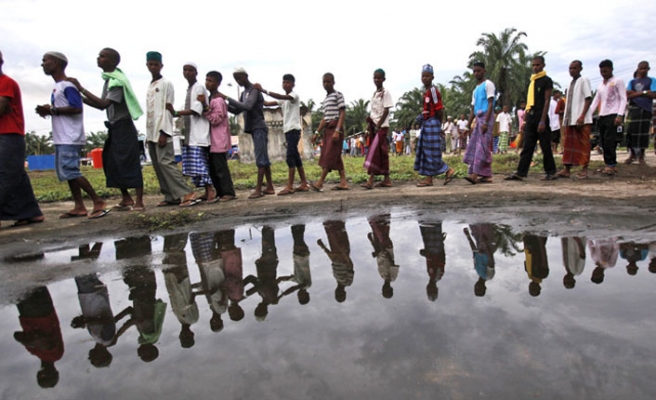 Six Rohingya were killed early Friday after a blaze tore through an overcrowded camp for the persecuted minority in Myanmar's Rakhine state, the local fire service said.

But less visible are the 129,000 Rohingya confined to squalid camps further south near the capital Sittwe following an earlier bout of violence in 2012.

Hundreds were killed that year in riots between Rakhine Buddhists and the stateless minority, who were corralled into destitute camps away from their former neighbours.

"Six people, one man and five women were killed," he said, adding that 15 communal longhouses were also destroyed in the blaze thought to have been started in a kitchen accident.

"We were able to bring the fire under control about 1:10 am this morning and had put it out completely by around 3 am," he said.

A total of 822 people were left without shelter, local media reported.

Conditions in the camps are dire and Rohingya trapped there have virtually no access to healthcare, education and work, relying on food handouts from aid agencies to survive.

Access into the camps is also tightly controlled, effectively cutting their inhabitants off from the outside world and leaving their plight largely forgotten.

Fires in the camps are common because of "severe" overcrowding, according to the UN's Office for the Coordination of Humanitarian Affairs (OCHA).

"Many camp residents have built makeshift extensions to their shelters to create more space for their families. So when a fire breaks out, it is more likely to spread quickly," said OCHA spokesman Pierre Peron.

Hla Win, a Rohingya man from a nearby camp, told AFP that fire trucks were slow to arrive along the dilapidated roads from Sittwe and the lack of water also hampered efforts to extinguish the blaze.

"We have no ponds near the camps," he said. "That's why the fire destroyed so much."

Myanmar has vowed to close nearly 20 of the camps around Sittwe in the coming months.

Rights groups say the move will achieve little without ending movement restrictions or granting Rohingya a pathway to citizenship.