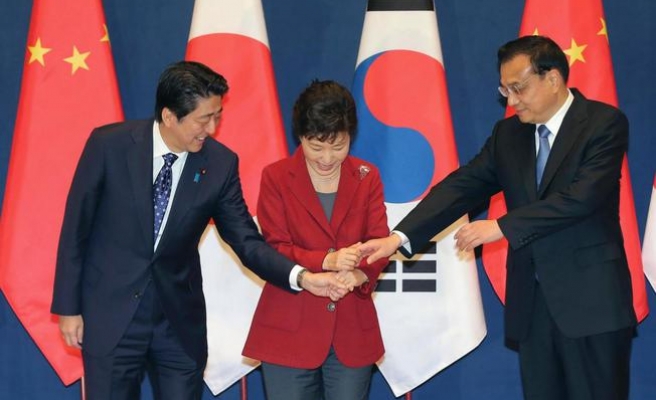 The leaders of South Korea, China and Japan said they were willing to work together again to promote regional trade and security after setting aside historical animosities Sunday at their first summit talks for over three years.

South Korean President Park Geun-Hye and Chinese and Japanese premiers Li Keqiang and Shinzo Abe discussed a wide range of topics, from free trade to the threat of North Korea's nuclear weapons programme, during a 90-minute meeting in Seoul.

No substantive breakthrough had been expected, with the meeting seen more as a symbolic statement of intent by Northeast Asia's three largest economies, who all stand to reap significant diplomatic and economic gains from closer ties.

"We shared the view that trilateral cooperation has been completely restored on the occasion of this summit," they said in a lengthy joint statement after the meeting.

The three countries began holding annual summits in 2008, but the souring of Japan's relations with its two neighbours over issues dating back to World War II triggered a lengthy hiatus after the last meeting in 2012.

The focus on Sunday was very much on economic ties, with China especially keen to strengthen trade links as it tries to inject fresh momentum into its slowing economy.

The joint statement included a commitment to sealing a trilateral free-trade agreement that would provide a counterpoint to the new U.S.-led Pacific trade pact of which China and South Korea are not members.

Also high on the agenda was North Korea, whose nuclear weapons ambitions worry -- and threaten -- all three countries including China, the North's main diplomatic protector and economic benefactor.

The leaders reaffirmed their "firm opposition" to the development of nuclear weapons on the Korean peninsula as well as any action that could raise tensions or violate UN resolutions.

Pyongyang has recently hinted at a space rocket launch which would contravene a UN ban on its use of ballistic missile technology.

"It is our shared interest to maintain peace and stability on the Korean peninsula, and we have to firmly maintain our goal to denuclearise North Korea," Park said during a joint three-way briefing for reporters.

The summit coincided with a visit by U.S. Defence Secretary Ashton Carter to the Demilitarised Zone (DMZ) dividing the peninsula, during which he underlined the strength of the military alliance with Seoul.

Park and Li met for one-on-one talks on Saturday, but all eyes now will be on the South Korean president's first-ever summit with Abe on Monday -- a major step after an extended diplomatic freeze.

The rift has frustrated Washington, which would prefer its two key Asian allies to focus together on containing an increasingly assertive China.

The last summit was in December 2011 between the then-South Korean and Japanese leaders Lee Myung-Bak and Yoshihiko Noda.

Relations between Seoul and Tokyo have never been easy -- clouded by sensitive historical disputes related to Japan's 1910-45 colonial rule over the Korean peninsula, especially the issue of Korean "comfort women" forcibly recruited to work in Japanese wartime military brothels.

Park, who took office in early 2013, had until now repeatedly refused to meet Abe, saying Japan had yet to properly atone for its past actions.

Japan maintains that all issue were settled in a 1965 normalisation agreement, which saw Tokyo make a total payment of $800 million in grants or loans to its former colony.

China has similarly bitter memories of Japanese wartime aggression and is also at odds with Tokyo over sovereignty of an island chain in the East China Sea.

Sunday's joint statement made no overt reference to such sensitive issues, although it did stress the importance of "facing up" to history.

"We have agreed to look at history in a straightforward and future-oriented manner and properly handle sensitive issues, including historical one," said Li Keqiang.