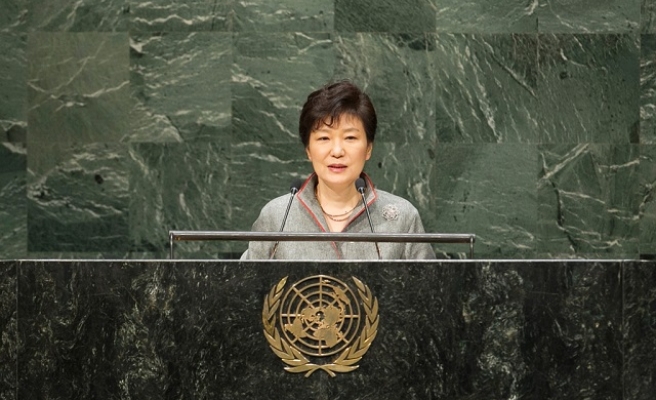 With Pyongyang expected to carry out a major provocation next month, it was unsurprising that a significant portion of Park Geun-hye's address was dedicated to the North.

Earlier this month Pyongyang announced the restart of operations at its main nuclear complex, while also revealing it aimed to launch satellites.

Either a long-range rocket launch or a fourth nuclear test by the North would break multiple U.N. resolutions -- but experts fear that the reclusive state will again defy the international community in order to mark the 70th anniversary of its Workers' Party on Oct. 10.

A provocation now would harm "the hard-won mood for inter-Korean dialogue," Park said Tuesday (Monday EDT) in reference to a recent breakthrough cooperation deal between representatives of Seoul and Pyongyang.

But she also called on Japan to maintain peace and stability while warning of "new moves that could potentially have profound consequences for Northeast Asia's security order."

As such, Park urged Tokyo to transparently implement the newly-passed militarization legislation representing a leap from its post-World War II pacifism.

Given South Korea's 1910-45 colonization by Japan, Seoul has been at the forefront of global caution concerning its present Shinzo Abe administration.

Now more than halfway through her five-year presidency, Park has so far refused to hold an official summit with the Japanese prime minister -- though she did briefly chat with him on this trip to the U.S.

Still, it would seem that a meaningful solution to a number of issues related to Japan's colonial rule is currently as distant as inter-Korean reconciliation.

Chief among the diplomatic challenges facing Seoul and Tokyo is that of former so-called comfort women.

With fewer than 50 surviving Korean victims of Japanese sexual slavery, Park asserted during her speech that "there is no path to unlocking the future if the past is not acknowledged."

Japan insists that the matter was settled under a broad 1965 treaty with South Korea, but ex-comfort women say they are still waiting for an apology and compensation.

"Solutions that can bring healing to their hearts need to be devised quickly, while these victims are still alive," Park said.

"We now hope the spirit of enduring partnership towards humanity that the U.N. embodies will resonate far and wide so that past wounds can be healed and a new future can unfold."