S.Korea wants reunions a priority at upcoming talks with North

North and South Korea agreed on Saturday to resume reconciliation talks after the North sent its highest level delegation ever to the South, raising hope for a breakthrough in their tense ties. 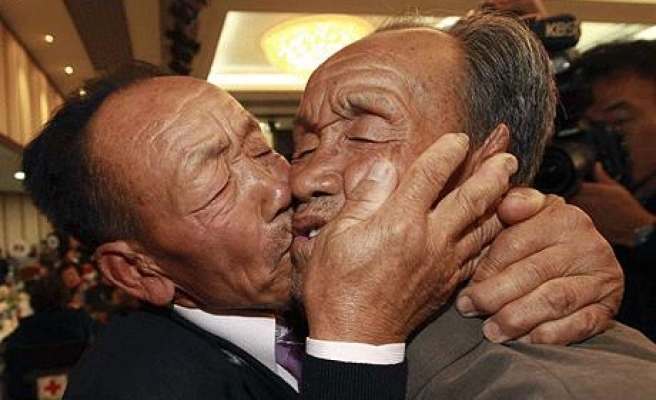 South Korea wants to discuss the reunion of families separated by the Korean War in talks expected soon with North Korea, the South's Unification Ministry said on Monday, after a surprise high-level visit by North Korean envoys at the weekend.

North and South Korea agreed on Saturday to resume reconciliation talks after the North sent its highest level delegation ever to the South, raising hope for a breakthrough in their tense ties.

"We've said the issue of separated families is the most urgent and important one, so I think it's necessary for us to raise that issue," Unification Ministry spokesman Lim Byeong-cheol said.

Reunions of elderly relatives separated by decades of hostility have become a barometer of relations between the two Koreas, only happening during periods of warmer ties.

The two Koreas remain technically at war under a truce that ended their 1950-53 conflict with no regular channel for contacts between their people.

There have been 19 family reunions since the first one in 1985 and South Korea wants to make them regular events, citing the humanitarian urgency for separated family members now growing old.

A North Korean delegation attending the closing ceremony of the Asian Games in the South Korean city of Incheon held talks with South Korean officials on Saturday and they agreed to resume talks on improving ties that have been stalled since February.

South Korean President Park Geun-hye has been pushing for a resumption of high-level dialogue to ease tension, and the North agreed that senior officials would meet some time in late October or early November.

Park on Monday said the visit by the North Korean delegation, organised with just 24 hours notice, should be an opportunity to open a regular channel of inter-Korean dialogue, adding the resumption of talks was a meaningful step in improving ties.

U.S. officials visiting Seoul welcomed the resumption of dialogue between the Koreas after meetings with South Korean officials on Monday.

"I made clear that as is a consistent element of U.S. policy the United States supports the efforts on the part of (South Korea) to promote and enhance inter-Korean relations," Assistant U.S. Secretary of State Daniel Russel told reporters.

Hopes for an improvement in relations have in the past been repeatedly dashed, with the North reneging on deals, walking out of talks and even threatening to attack its neighbour, turning it into a "sea of fire".