In Pakistan, caste divisions are so deep that some would rather put their lives in jeopardy than break with norms. 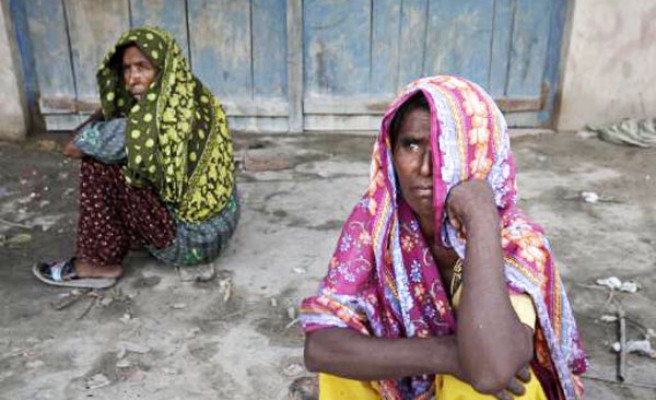 Rehmat Soomro and her family are threatened by flood waters ravaging southern Pakistan, and could face starvation and disease if they don't leave their village.

But unlike others, they refuse to move to a relief camp because they don't want to mix with other castes.

"We don't want to live with families of another caste," said the 40-year-old widow, standing in front of her small brick house, as waters crept up.

In Pakistan, caste divisions are so deep that some would rather put their lives in jeopardy than break with norms.

Relief workers have approached the Soomros repeatedly, pleading with them to leave their village of Benazir Basti, where water has inundated every street.

Water-borne diseases are a danger. The children already have skin diseases but the Soomros won't budge.

"Even if the children get sick here, or we get sick, and we can't help them, we won't leave because of our caste," said Rehmat, a 40-year-old widow with four children.

The caste mentality is deeply rooted in Pakistani society, especially in rural areas. It dictates social, political and economic life.

The caste setup in Pakistan varies from region to region, but divisions are based on religious backgrounds, affluence and professions, with landowning castes considered higher castes while less affluent artisan and worker classes are at the lower end.

Pakistan's cash-strapped government has been slow to respond to the floods, which have killed over 300 people and damaged or destroyed about 1.4 million houses.

The situation is similar to last year, when authorities failed to ease the suffering of millions hit by epic floods in July and August, prompting the military to take charge.

But that doesn't really matter in Benazir Basti.

"If we were another caste, we would just walk out of here. But because we are Soomros we can't," said Rehmat.

It's not only caste traditions that are keeping village residents put. Some worry their belongings will be stolen if they abandon their homes. Thieves capitalising on the chaos have already struck.

Ahmed, a 54-year-old labourer, is anxious because flood waters have disrupted food supplies to the village. Still, leaving isn't an option.

"People have had livestock stolen in the middle of the night," Bhatti said as he waded through thigh-deep water.

"We stay up day and night, we are always awake, trying to protect our houses and our livestock from thieves."