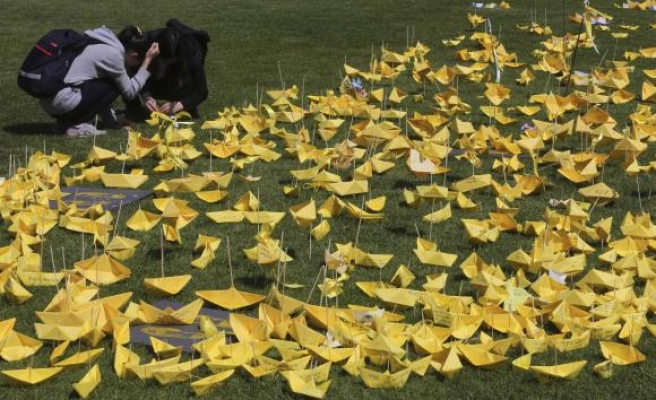 South Korean President Park Geun-hye's conservative party fought close races on Wednesday in regional and mayoral elections seen as a referendum on the government's handling of a ferry disaster that killed more than 300 people in April.

Exit polls released right after the close of polls at 6 p.m. (0900 GMT) showed candidates for the ruling conservative party were headed for victory in five of the 17 key mayoral and provincial races.

Opposition candidates were likely to win in five. The seven other races were too close to call, the polls showed.

The sinking of the ferry Sewol has sidelined traditional campaign issues, such as jobs, education and welfare, and focused attention on the perceived failure of Asia's fourth-largest economy to enforce safety standards.

"I voted this time with a focus on safety, rather than the economy," 26-year-old Ahn Jin-young said after casting her vote in the capital, Seoul.

Another voter, Kim Soo-hyun, said the Sewol incident led her to vote against the government: "I'm giving the opposition a chance this time as a way to reproach the government."

Park's approval ratings fell sharply from 61 to 46 percent in the days after the April 16 ferry disaster - her lowest since coming to power in February 2013 - and show little sign of improving.

Opposition candidates look set to win the mayoral race in Seoul and in its traditional stronghold in the country's southwest, the exit polls, conducted jointly by three television networks, showed.

Park's conservative Saenuri Party was ahead in the southeast, where it traditionally makes strong showings, the polls showed.

But close races in the cities of Incheon and Busan and in other contested districts indicated Park's ruling conservative Saenuri Party was unlikely to suffer landslide defeats.

Polls by Gallup Korea in late May suggested more than 40 percent of voters still support the Saenuri Party. Only 28 percent said they supported the main opposition New Politics Alliance for Democracy (NPAD).

About 40 percent of voters in South Korea are older than 50 and traditionally vote conservative - unlike younger voters, who are less likely to cast ballots.

The opposition has been careful not to campaign on the government's handling of the disaster because distrust of politicians has increased across the board. The elections are the first nationwide polls since Park took office.

The Saenuri Party staked its campaign on President Park's pledge to reform government bureaucracy and improve safety oversight, arguing that the ferry disaster presented an opportunity for change.

"Korea after the Sewol disaster must be different from Korea before the disaster," said senior Saenuri official Lee Wan-koo. "We need to reform this country ... and create a safe country."

Liberal Seoul mayor Park Won-soon, of the NPAD, was ahead by 10 percentage points over his conservative rival and was expected to retain his post, seen by some as a springboard to the presidency, the exit polls showed.

The Sewol ferry sank on a routine trip south from the port of Incheon to the holiday island of Jeju on April 16. More than 300 people were killed, most of them students from the Danwon High School on the outskirts of Seoul.

The ferry was heavily overloaded, was travelling too fast on a turn and many of its crew abandoned ship while the children waited in their cabins as they had been told to do.