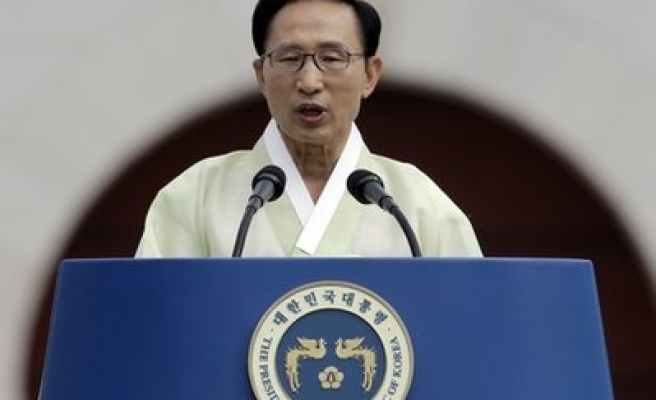 South Korean President Lee Myung-bak on Sunday proposed a "reunification tax" to help fund the expected $1 trillion bill when the two Koreas eventually rejoin, but maintained his tough stance against the North.

There are no signs that North and South Korea are anywhere near close to reconciliation, with about 1 million soldiers facing off across the Cold War's last great divide.

"Reunification will definitely come," said Lee in a speech marking the liberation of the Korean peninsula from Japanese colonial rule.

"I believe that the time has come to start discussing realistic policies to prepare for that day such as a reunification tax."

The two states are still technically at war having only signed a ceasefire in 1953. Tensions are as high as ever following the torpedoing of a South Korean warship this year.

Lee said it was now time to start saving for the massive cost of reuniting with the North, whose economy has been driven close to ruin by central economic planning, heavy military expenditure and years of famine.

<North Korea is an economic backwater, with annual gross national income of about $24 billon in 2009 -- less than 3 percent the size of the South's economy.

By some estimates it would cost more than $1 trillion to absorb the North.

That could wreak havoc on South Korea's economy, with a state-funded research agency saying it would raise the tax bill for South Koreans by the equivalent of 2 percentage points annually for 60 years.

Opinion polls, however, show more than 60 percent of South Koreans want unification, but they would prefer it happen later rather than sooner because of the cost.

Lee has cut aide to a trickle and all but cut off investment in North Korea after Pyongyang conducted a second nuclear test and test-fired long range missiles last year.

On Sunday, he again denounced the torpedoing of the sinking of the Cheonan corvette, which Seoul blames on the North, and repeated demands Pyongyang give up its nuclear arms ambitions to win aid and improve business ties.