The announcement came as a high-level United Nations representative held talks with a senior North Korean official during a rare trip to Pyongyang. 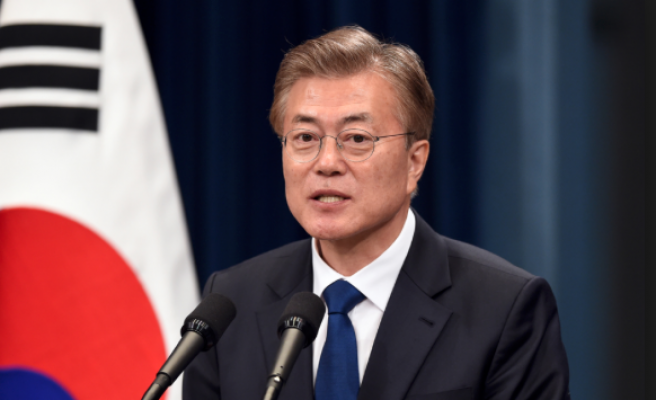 South Korean President Moon Jae-In will visit China next week for talks on North Korea and other issues, his office said Wednesday, amid tentative signs of diplomatic movement after months of high tensions over Pyongyang's nuclear and missile threats.

It was not immediately clear what was discussed between Feltman and the North's vice foreign minister Pak Myong-Kuk.

Feltman's trip -- the first by a UN diplomat of his rank since 2010 -- comes less than a week after North Korea test-fired a new ballistic missile said to be capable of reaching the United States.

China has proposed that the North suspend missile and nuclear tests in exchange for a suspension of US-South Korean military exercises, a suggestion Washington has repeatedly rejected.

A US B-1B bomber flew over the Korean peninsula on Wednesday, Seoul's defence ministry said, as part of a major joint air exercise slammed by the North as an "all-out provocation" that could trigger a nuclear war.

Moon will arrive in Beijing next Wednesday for a four-day state visit, his first trip to China since taking office in May. The two countries are trying to improve ties strained by Seoul's deployment of a US missile defence system.

Seoul and Washington say the Terminal High Altitude Area Defense (THAAD) system is intended solely to counter missile threats from North Korea but Beijing sees it as a threat to its own military capabilities.

It has imposed a series of sanctions on South Korean firms and banned Chinese tour groups from going to the country in moves seen as economic retaliation. The tour group ban has since been partially lifted.

China is South Korea's biggest trading partner and the measures have had a big impact on some of the South's biggest companies, including retail conglomerate Lotte -- which provided a golf course used for the THAAD deployment -- and auto giant Hyundai.