Soyuz capsule with Russian, US crew land in Kazakhstan

A Soyuz capsule carrying two Russian cosmonauts and a U.S. astronaut back to Earth from the International Space Station, an announcer said. 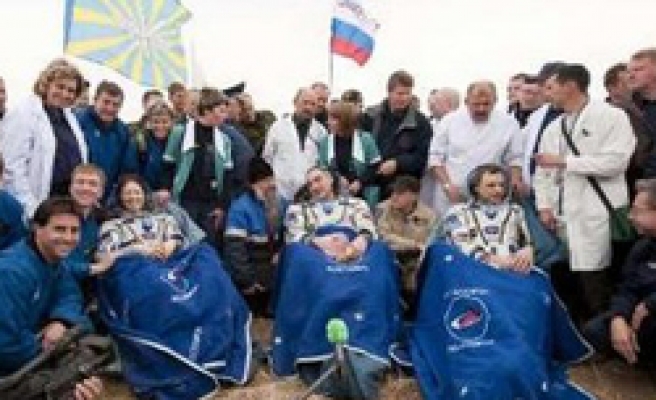 A Soyuz capsule carrying two Russian cosmonauts and a U.S. astronaut from the International Space Station landed safely in Kazakhstan on Saturday.

"The TMA module has landed," an announcer at Mission Control outside Moscow said to applause from officials and relatives, relieved after an initial attempt to return from the orbital outpost was foiled by an equipment problem on Friday.

Space officials said the capsule landed upright, on time and on target near Arkalyk on the central Kazakh steppe. Swooping down beneath parachutes, it kicked up a cloud of dust as it hit after firing rockets to cushion the landing.

NASA TV showed technicians crouching over the hatch of the gumdrop-shaped capsule, its nose scorched by the heat of re-entry, and helping Soyuz commander Alexander Skvortsov out in his spacesuit.

"I feel fantastic. The landing was soft and smooth," he said.

NASA astronaut Tracy Caldwell Dyson was next out, smiling as she was carried to an armchair at the landing site and covered with a blue blanket.

As cosmonaut Mikhail Korniyenko was extracted from the hatch in the top of the cramped capsule, Dyson chatted on a satellite phone.

Skvortsov, Dyson and Korniyenko spent nearly six months aboard the International Space Station, arriving on April 4 in the same Soyuz TMA-18 that brought them back to Earth.

They were to have returned on Friday, but the descent was aborted after latches on a docking port holding the spacecraft to the orbital station failed to open, sending puzzled engineers scrambling for answers.

NASA later said crew members rigged up a solution, attaching jumper cables to bypass a failed hatch sensor that was blocking commands, enabling the latches on the Russian-made Poisk module to open.

"Space station crew members installed a series of jumpers, bypassing a failed component that had prevented commands from being received by the Russian Poisk module's docking mechanism," the U.S. space agency said on its website.

The Soyuz separated smoothly from the docking port this time and landed in Kazakhstan at 11:23 a.m. (0523GMT).

The three crewmates' stay aboard the station was marred by mishaps including a cooling system failure in August and a faulty radio link that sent a supply craft coasting past after an aborted docking. It docked successfully two days later.

"This crew ... had to deal with some very serious problems in orbit and they met every challenge professionally and fixed all the problems," Mark Bauman, NASA's deputy director of manned space programmes, said.

"I think we can see the benefit of having humans in space to keep the station healthy and yielding the science return that it will yield," he said.

U.S. space shuttle missions in November and February are to to complete the $100 billion station, a project of 16 nations that has been under construction 220 miles (355 km) above Earth since 1998.

Single-use Russian Soyuz craft will ferry all crews to the station after the NASA retires its shuttle fleet next year.

Earlier this year, Russia announced a halt to trips by millionaire space tourists to free capacity on Soyuz flights as the station has expanded to accommodate a permanent crew of six.

Russian Fyodor Yurchikhin and NASA astronauts Doug Wheelock and Shannon Walker remained aboard the station as planned after Saturday's departure.