A boatload of Sri Lankan asylum seekers returned by Australia are to be charged with leaving the country illegally and those found guilty face "rigorous imprisonment", police said 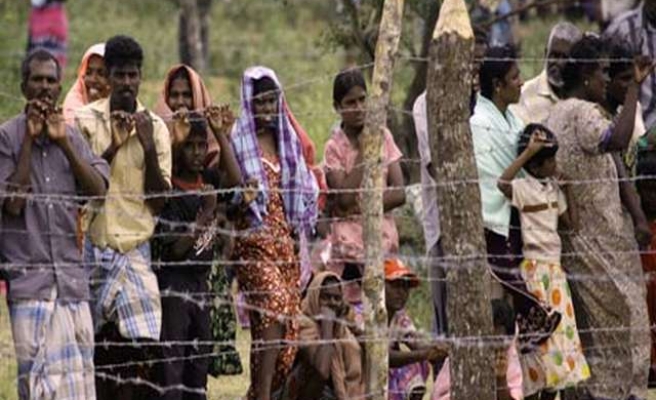 The injunction, which runs until an emergency court hearing on Tuesday afternoon, follows the interception and return on Sunday of 41 other Sri Lankan asylum seekers on a separate boat by the Australian navy.

Sri Lankan police said those 41 would be charged with leaving the country illegally and any found guilty would face "rigorous imprisonment", raising concerns about rights abuses in the island nation.

Lawyer George Newhouse of law firm Shine, who represents 48 of the 153 people aboard the second boat, won the injunction in a special hearing late on Monday.

The asylum seekers were "entitled to have their claims for protection processed in accordance with Australian law," Newhouse said.

Immigration Minister Scott Morrison's office said the "government notes the matter is currently before the court and accordingly will be making no further comment."

Earlier on Monday, Morrison adhered to the government's usual secrecy over its "Operation Sovereign Borders", declining to comment on reports of the second boat other than to say it was not in Australian waters.

The 41 asylum seekers on the first boat were transferred to Sri Lankan authorities at sea on Sunday, off the country's eastern port of Batticaloa, after Australian border personnel intercepted the vessel west of the remote Cocos Islands last week, on suspicion of entering Australian waters illegally.

The Sri Lankan navy handed the group to the police and police spokesman Ajith Rohana said they would be brought before a court in the southwestern port of Galle. He did not say when.

"They will be charged under the Immigrants and Emigrants Act," he told Reuters. "The sentence for those proved to have left illegally is two years of rigorous imprisonment and a fine.

"But if there are any facilitators, then they will be tried, even if they have left via an authorised port legally."

Rights groups and some Western countries have raised concerns with Sri Lanka over accusations of human rights violations during the final phase of the war against Tamil separatists that ended in 2009.

In the last three months, three Tamil asylum seekers on temporary visas in Australia, facing the prospect of being returned to Sri Lanka, have set themselves on fire. Two died.

"These people are being held on the high seas, without being allowed to contact lawyers, challenge their detention in court or speak with family and friends," said Ben Saul, a law professor at Sydney University who signed Monday's statement.

A relative of a three-year-old girl aboard the boat with 153 asylum seekers has appealed to Australian Immigration Minister Scott Morrison to keep his family safe.

"I want to plead with the Australian minister to stop our pain and let us know what he has done with all the kids and families on the boat," the relative, who spoke on condition of anyonymity, was quoted as saying in a statement from the Tamil Refugee Council.

"I ask him to be kind to these people. They are all very frightened. They cannot be sent back to Sri Lanka. Many of them will be tortured again and even killed."

The statement carried a photograph of a smiling child, identified only as Febrina, dressed in costume.

The UN expressed serious concerns last week about Australia's brief assessment of the asylum seekers' claims when reports of the two boats first emerged. The government declined to comment at the time.

"There was a lot of shrill and hysterical claims that were made over the course of the past week," Morrison told Australian radio on Monday. "None of those has proved to be true."

Morrison said the 37 Sinhalese and four Tamils went through what he called an "enhanced screening process" before the handover, adding that one Sinhalese was entitled to a further refugee assessment but had "voluntarily requested" to return.

The incident comes on the eve of a visit by Morrison this week to Sri Lanka, where he is due to talk with government and defence officials and attend a ceremony with President Mahinda Rajapakse to mark Australia's gift of two former patrol vessels.

While his popularity has since plummeted, more than 70 percent of Australians support the government's border policy, including sending boats back when safe to do so, according to a recent poll by the Lowy Institute think tank.

The government has touted its success in blocking asylum seeker boats, saying there have been no illegal arrivals since last December.

Australia received 16,000 asylum seeker applications last year, just under 0.5 percent of the 3.6 million lodged worldwide, UN figures show, and a drop from one percent in 2010.

There was "nothing legal" about the government's conduct, opposition Greens Party lawmaker Sarah Hanson-Young told the Australian Broadcasting Corp. "They fall far short of our international obligations," she said.