Sri Lanka's president compared the U.S. move over alleged war crimes to a professional boxer taking on a schoolboy. 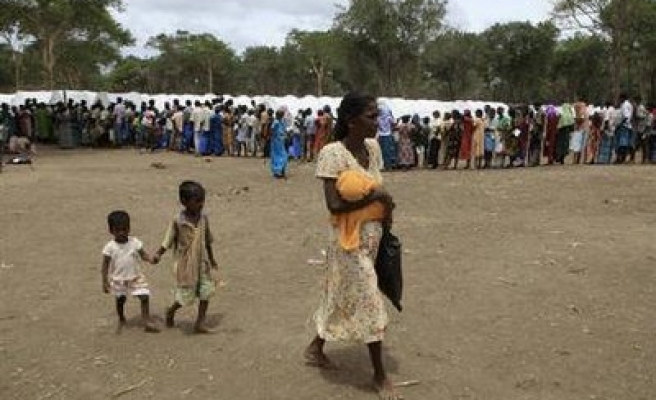 Sri Lanka's president denounced Washington's plan to move a U.N. human rights resolution against the island nation on Friday, comparing the U.S. move over alleged war crimes to a professional boxer taking on a schoolboy.

"There should not have been a resolution at all," Mahinda Rajapaksa said in his first news conference with the foreign media in Colombo for more than three years. "If they have evidence they should have given (it) to us."

Pressure has mounted on Rajapaksa's government ahead of a U.N. Human Rights Council debate next month, where the United States plans to propose a resolution that may call for an international investigation in Sri Lanka.

In a report released this week, U.N. human rights chief Navi Pillay said many thousands of civilians were killed, injured or remain missing after the 26-year civil conflict between government forces and separatist Liberation Tigers of Tamil Eelam (LTTE) in the north of the island that ended in May 2009.

She said the government had failed to do its own credible investigations and there had been little progress in establishing accountability for "emblematic" wartime crimes.

Rajapaksa, president since 2005, said he was at a loss to understand why Washington was pressing for an inquiry.

"God knows why," he told reporters at Temple Trees, an imposing brilliant-white palace built near Colombo's ocean front by British colonialists. "If they tell us, at least we can look at it."

He likened Colombo's stand-off with Washington to a fight between a schoolboy and Cassius Clay - the former world boxing champion better known as Muhammad Ali.

"This is like Cassius Clay playing against a schoolboy," he said.

A U.N. panel has said around 40,000 mainly Tamil civilians died in the final few months Of the war. Both sides committed atrocities, but army shelling killed most of the victims.

The West and rights groups say rights violations have continued, including abductions of anti-government critics, attacks on churches, mosques and the media, as well as curbs on freedom of association and labour union activity.

Rajapaksa's administration, in 18 pages of comments as long as the human rights chief's report, rejected her recommendations as "arbitrary, intrusive and of a political nature".

The president said Colombo has done its best to move ahead with a post-war reconciliation process, sometimes spending more money on infrastructure in the north - where the Tamil minority is concentrated - than the south.

He said support from Britain and Canada for the resolution proposed by the United States was the result of domestic pressure from Tamil diaspora in those countries. However, he noted that Sri Lanka could count on support from China and Russia at the United Nations, and possibly India too.

Aides say that Rajapaksa, who abolished the maximum tenure of two six-year terms for a president, may call an election later this year to seek a third term.

However, he said he had not yet decided whether to hold an election before his current term ends in 2016.