﻿Hardline ultranationalist monks are being questioned over anti-Muslim attacks in June. 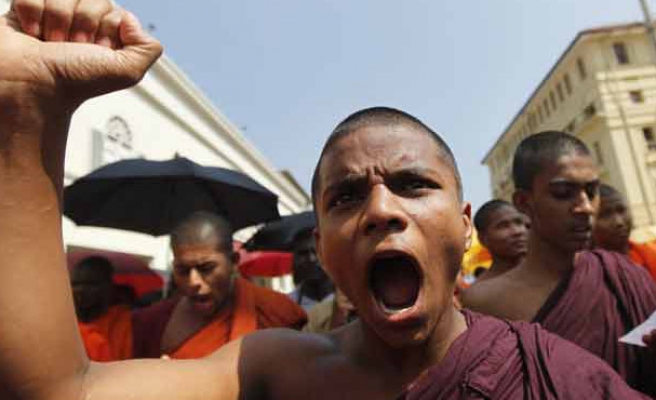 A Sri Lankan monk who leads a group of hardline Buddhist nationalists is being questioned by police in connection with attacks on Muslims communities in June.

Galagoda Aththe Gnanasara's Bodu Bala Sena group have been accused of instigating attacks on Muslim communities in the southwestern towns of Aluthgama, Dharga and Beruwala that killed at least three people on June 15.

"We were not allowed to be there. Officers of the Criminal Investigation Division is questioning Venerable Galagoda Aththe Gnanasara Thero," Dilanthe Withanage, the Chief Executive Officer of Bodu Bala Sena told Anadolu Agency.

The violence caused million dollars worth of damages to houses, mosques, and businesses in the towns after mobs set fires and threw stones.

According to the UN's Office of the High Commissioner for Human Rights, more than 350 violent attacks against Muslims and over 150 attacks against Christians have been reported in Sri Lanka in the last two years.

Muslim and Christian communities are reportedly frequently subjected to hate speech, discrimination, attacks and acts of violence throughout Sri Lanka.

“The Government must end the violence and put in place urgent protective measures to ensure the personal security of all individuals belonging to religious minority communities living in the country,” said the UN's Special Rapporteur on minority issues, Rita Izsak in a statement.