Storm heads for China after shutting down south Taiwan

Storm tracking service Tropical Storm Risk currently rates Nanmadol as a tropical storm, and sees it weakening further to a tropical depression over the next 48 hours. 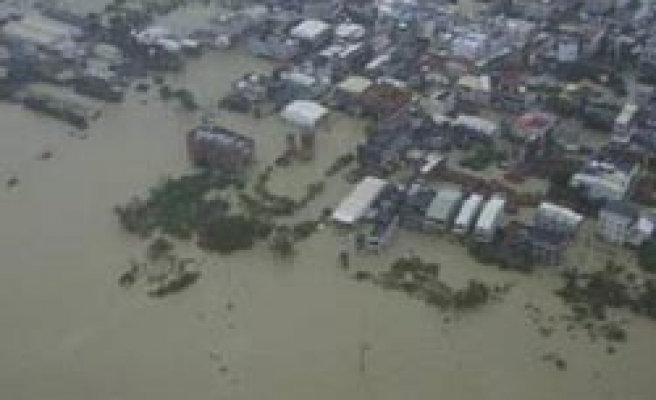 The storm, downgraded from a typhoon on Monday, was the first of the season to land in Taiwan. By 0600 GMT its centre had passed over Taiwan and was heading for southern China.

Taiwan's central weather bureau maintained a heavy rain and strong wind warning for the island, forecasting rainfall in excess of 350 mm in a 24-hour period in the northeast, east and southeast.

Mindful of the fierce criticism of its handling of deadly typhoon Morakot in 2009, and with presidential elections looming, the government had put some 35,000 soldiers on standby and evacuated some 8,000 residents, mostly in the island's rural, mountainous southeast, ahead of the storm.

Storm tracking service Tropical Storm Risk currently rates Nanmadol as a tropical storm, and sees it weakening further to a tropical depression over the next 48 hours.

Businesses in Taiwan's south and east were ordered closed on Monday, but those in the capital Taipei and Taiwan's financial markets were open as normal. Major hi-tech companies TSMC , AU Optronics and Chimei said they were not affected by the storm.

Schools were closed across the island and rail services and domestic and international flights disrupted. Some 31,400 households in the south and east had lost power, the National Fire Agency said.

One TV station also reported minor injuries to a passing motor cyclist after strong winds blew out a glass office window in the northern city of Taoyuan.

In August 2009 typhoon Morakot cut a wide swathe of destruction across southern Taiwan, leaving some 700 people dead or missing including over 400 in a village that was buried in a landslide.

President Ma Ying-jeou was forced to publicly apologise for the government's handling of the disaster and then-Premier Liu Chao-shiuan resigned to take responsibility. Taiwanese will vote in presidential elections in January.