India's electorate of 814 million will be able to vote during the nine-phase election between April 7 and May 12. 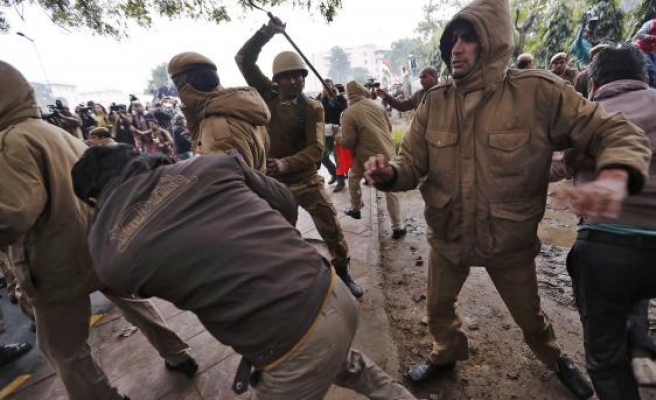 Street clashes marred an announcement on Wednesday that India's general election will start on April 7 as passions run high in a race that pits Hindu nationalist Narendra Modi against the unpopular Nehru-Gandhi family's ruling party.

Chief Election Commissioner V.S. Sampath said 814 million people had registered to vote, a number larger than the population of Europe, making this the biggest election the world has ever seen. Results are due to be announced on May 16.

In Delhi and a regional city, members of Modi's Bharatiya Janata Party (BJP) fought street battles with supporters of a young anti-corruption party hours after the announcement. Several people were injured and police used water cannons to disperse the crowds.

The violence broke out after the leader of the anti-corruption party was stopped by police during a campaign in Modi's state of Gujarat. Supporters gathered outside BJP offices to protest his detention.

The election follows growing anger amongst urban Indians over corruption as well as a sense that the centre-left government led by the Congress party has frittered away opportunities for rapid growth.

Modi has emerged in opinion polls as the favourite to head the next government, buoyed by his strong economic track record as chief minister of the state of Gujarat.

Exuding self-confidence, Modi has won the support of many middle-class Indians who even a year ago would not have voted for a man accused by critics of failing to stop, or even tacitly encouraging, a spasm of Hindu-Muslim bloodshed in Gujarat in 2002. Modi has denied any wrongdoing and the Supreme Court has said there is not enough evidence to pursue investigations.

Born of a street movement against graft scandals related to the sale of natural resources over the last decade, the anti-corruption Aam Aadmi (Common Man) Party has also emerged as a major player, alleging corruption in both main parties.

It is not likely to win many seats, but is setting the agenda for other parties by harping on high utility prices and crony capitalism.

Starting on April 7, voting will be held in nine stages, staggered until May 12, to allow security forces to be effectively deployed during an exercise that has often been marred by violence, ballot-rigging and buying votes.

"Credible elections conducted at regular, prescribed intervals are the very soul, or hallmark, of any democratic system," Sampath said, adding that he was particularly concerned about over-spending by candidates and parties.

The introduction of electronic voting and staggered phases over the past decade has dramatically decreased fraud on polling days, and India's elections are largely free and fair.