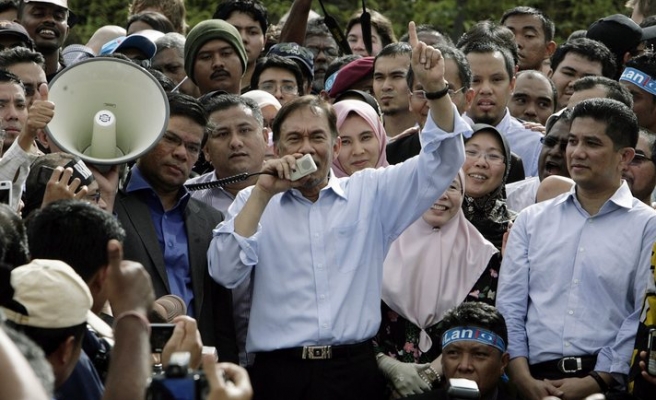 The end of a long-running political crisis for Malaysia's opposition has opened up new wounds after a royal sultan took the unprecedented step of choosing a candidate who was not proposed by the majority alliance in the nation's richest state.

The sultan's rejection of the wife of opposition leader Anwar Ibrahim as chief minister of Selangor state sets an undemocratic precedent at a time when authorities are carrying out the biggest crackdown on dissent in years, analysts said.

The months-long crisis in Selangor, the opposition's biggest prize in recent election gains against the long-ruling national coalition, has exposed deep rifts in Anwar's three-party alliance, raising doubts over whether it can stay intact.

It began when the PAS party that is part of the opposition refused to support Anwar's party's move to sack the former chief minister over accusations of incompetence and graft.

The top state official, Khalid Ibrahim, refused to accept the sacking and clung to power, backed by the ruling coalition and PAS.

The sultan, one of nine hereditary state rulers in Malaysia, played an interventionist role in the crisis, with the palace publicly rebuking Anwar at one point. On Tuesday, the sultan appointed Azmin Ali, the deputy president of Anwar's party, as the new chief minister.

The palace denied the sultan had interfered in the process and said Azmin was the only candidate with support across opposition ranks.

But Anwar's party said in a statement the sultan's decision had breached the Selangor constitution and the "principle of parliamentary democracy".

Modelled on the constitutional monarchy of former colonial master Britain, the sultans have a formal role of appointing candidates chosen by the majority in the state assembly. Anwar's politician wife, Wan Azizah, had the backing of the majority of state legislative members.

"This will create a very dangerous precedent about the concept of constitutional monarchy in the country," said Wan Saiful Wan Jan, chief executive of the Institute for Democratic and Economic Affairs.

The sultan's heavy hand in the Selangor crisis comes as police and prosecutors clamp down on dissent in the Southeast Asian nation with a flurry of arrests and charges under a colonial-era anti-sedition law.

Of more than a dozen cases in recent months, five have involved comments critical of sultans.

"The Sultan owes the public an explanation on reasons why he deviated from the constitution," said Maria Chin Abdullah, the head of electoral reform group Bersih.

Although Selangor remains under the control of the opposition, the wrangling has left the alliance more divided than ever and also widened a fissure within PAS between religious conservatives and moderates.

The multi-ethnic opposition has made gains in the past two general elections, eroding the once dominant majority of the National Front, but its momentum has stalled due to internal strife. Its predicament could worsen late next month when the charismatic Anwar, its unifying figure, faces a final appeal of his sentence in March to five years jail.

The former deputy prime minister and finance minister will be imprisoned if his appeal fails. He was previously jailed for six years corruption and other charges that rights groups say were politically motivated.

Some PAS conservatives have spoken openly about the possibility of taking the party out of the opposition alliance, which they have been formally part of since 2008. PAS won 21 seats in the 2013 national election, part of the opposition's best ever tally in the national parliament.

"PAS has a broad church of people and it may be too much for one party to handle such a diversity of opinion," said Wan Saiful.