Ma's resignation from the party post does not affect his position as president. He is serving his second, and final, four-year term as president, which ends in 2016. 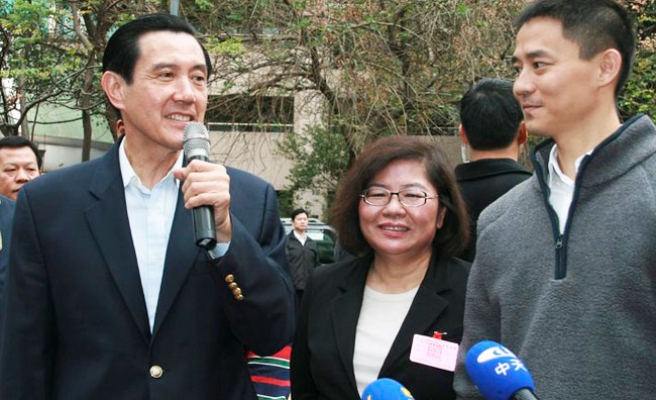 Taiwan's president on Tuesday said he was stepping down as chairman of the ruling party in a widely expected move that comes after the Kuomintang was trounced in local elections on the weekend.

President Ma Ying-jeou's resignation reflects the crisis that has gripped the KMT, which lost key cities in northern and central Taiwan in the polls, despite pushing policies that ushered in detente and deeper economic ties with China, which views the island as a breakaway province.

Ma's resignation from the party post does not affect his position as president. He is serving his second, and final, four-year term as president, which ends in 2016.

But the pace of improvement in cross-strait relations could slow next year as Ma is not likely be able to effectively steer policy within the ruling party and in government.

"This is the worst crisis for the KMT since we fled to Taiwan," said Li-Keng Kuei-fong, a member of KMT's central committee.

The party of Chiang Kai-shek that retreated to Taiwan after losing the Chinese civil war in 1949 is seen as friendly to China even though Beijing has never renounced the use of force to take back the island.

Since 2008, when Ma came to power, economic ties have flourished.

However, in the past year, suspicion about Taiwan becoming too reliant on China economically at the cost of the island's political autonomy has manifested itself in demonstrations.

In March, thousands of protesters, blocked the ratification of a cross-strait trade services agreement in an unprecedented sit-in in parliament.

Hundreds of people, many of them young, gathered in Taipei's Liberty Square in October to rally in sympathy with pro-democracy protesters in Hong Kong.

"As the chairman, Ying-jeou is willing to take the biggest responsibility," Ma said in a statement issued by the KMT, referring to himself. He will formally resign during a KMT central committee meeting on Wednesday.

China's Taiwan Affairs Office, which handles Taiwan matters for Beijing, said in a statement cross-strait, peaceful development was the "mainstream public opinion" for "compatriots" on both sides.

The KMT lost its hold on Taipei for the first time in 16 years when an independent candidate, who was backed by the pro-independence opposition Democratic Progressive Party, won the vote for mayor. The win in the capital was seen as a show of no confidence in Ma's China-friendly policies.

Within days, two vice chairmen of the KMT resigned and on Monday, Ma's cabinet formally stepped down, following Saturday's resignation of the premier to take responsibility for the election loss.

"The KMT must undergo a revolutionary change otherwise it won't survive," said Alfred Lin, at 24, the youngest member of the KMT's central committee.