Medvedev said after talks with his Tajik counterpart Imomali Rakhmon they had agreed to extend the presence of Russia's military in the country by 49 years. 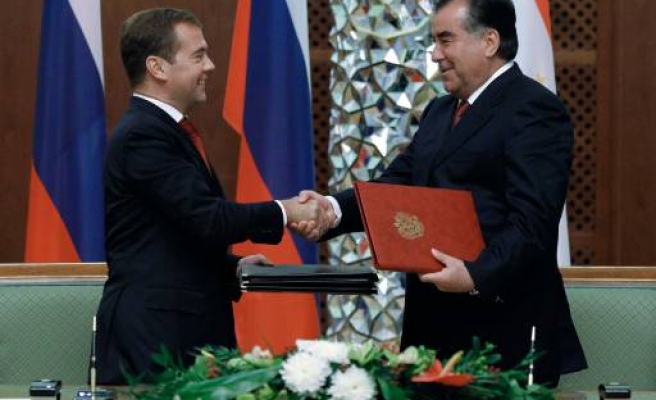 Russia agreed with Tajikistan on Friday to extend the deployment of its military base in the country, a move likely to boost Moscow's influence in Central Asia after the pullout of NATO troops from Afghanistan.

The expiry of Russia's current 10-year base lease deal with Tajikistan in 2013 would have dealt another blow to Moscow's clout in its former imperial backyard ahead of the planned 2014 NATO pullout from next-door Afghanistan.

But Russian President Dmitry Medvedev said after talks with his Tajik counterpart Imomali Rakhmon they had agreed to extend the presence of Russia's military in the country by 49 years.

"We have paid significant attention to the issues of security of our countries, to regional security," Medvedev said during a visit to Tajikistan. He said the new base deal would be signed in the first quarter of 2012.

The military base in Tajikistan, formerly known as the 201st division, numbers around 6,000 servicemen and is the biggest deployment of Russian ground forces abroad.

Medvedev and Rakhmon also oversaw the signing of a separate agreement on cooperation in guarding Tajikistan's lengthy and porous border with Afghanistan.

No details of the document were available.

Russian border guards left Tajikistan in 2005, ending a Soviet-era deployment and handing over all power over to local authorities.

Speaking alongside Pakistani President Asif Ali Zardari, Karzai and Rakhmon, Medvedev told reporters: "I believe all of my colleagues are united on one issue: the responsibility for what is happening in our region will in the final account inevitably rest with our countries -- Russia, Tajikistan, Afghanistan and Pakistan."

The four signed a joint statement agreeing to combat jointly terrorism, extremism, drug trafficking and organised crime in the region.

Apart from political dividends, Russia is hoping to gain economic benefits from a number of future regional projects.

The joint statement of the four presidents welcomed Russia's interest in participating in the TAPI project which aims to build a natural gas pipeline from ex-Soviet Central Asian nation of Turkmenistan to Afghanistan and on to Pakistan and India.

Turkmenistan, which sees the trans-Afghan pipeline as an alternative route to break its heavy dependence on Russia-bound gas exports, has played down talk of potential Russian participation in the project.