Police, soldiers and special forces launched a ground and air operation at the university in a bid to shut down the assault 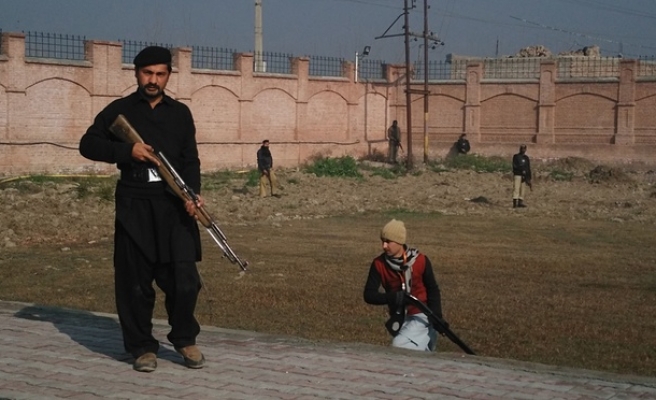 Several Taliban gunmen have attacked Bacha Khan University in northwest Pakistan, reportedly killing up to 21 people and injuring 50 others.

The attack on the Bacha Khan university in Charsadda, about 50 kilometres (30 miles) from the city of Peshawar, is the latest to hit the militant-infested region.

Police, soldiers and special forces launched a ground and air operation at the university in a bid to shut down the assault, as television images showed female students fleeing the campus.

The death toll in a gun and explosives attack on a university in northwestern Pakistan has risen to 21, police said, adding that security forces had ended the operation against the gunmen.

"The death toll in the terrorist attack has risen to 21," regional police chief Saeed Wazir said without specifying if that included the four militants the army stated it had killed.

He said the operation had ended and security forces were clearing the area, with most of the student victims shot dead at a hostel for boys on the Bacha Khan University campus in Charsadda.

"All of them have bullet wounds," he said.

The Pakistani Taliban claimed responsibility for a gun and explosives attack on a university in the country's northwest that left at least 21 people dead.

"Our four suicide attackers carried out the attack on Bacha Khan University today," Umar Mansoor, a commander in the Tehreek-e-Taliban Pakistani (TTP) militant group told AFP by phone from an undisclosed location.

Mansoor added that the attack it was in response to a military offensive against extremist strongholds in the tribal areas.

"Two more terrorists who were firing from inside the Block cordoned by Army troops, shot (and) killed. Op continues."

It was not immediately clear if the two were included in the toll of five given by emergency official Faizi.

Geology student Zahoor Ahmed said he had tried to leave his hostel after hearing shots fired.

"(We) were stopped by our chemistry lecturer who advised us to go inside. He was holding a pistol in his hand," he said.

"Then I saw a bullet hit him. I saw two militants were firing. I ran inside and then managed to flee by jumping over the back wall,"

Dozens of personnel in combat fatigues and automatic weapons piled out of transport vehicles as helicopters buzzed overhead and ambulances with sirens wailing approached the scene.

"There is firing inside the university at Charsadda," Saeed Wazir, a senior police official, told AFP, while Nasir Durrani, police chief of Khyber Pakhtunkhwa province -- of which Peshawar is the capital -- confirmed that the university has been cordoned off.

Officials at two hospitals in the city said a total of six injured people have been brought in from the university, four to the Lady Reading Hospital and two to a Charsadda district hospital.

"There are male and female staff members and students on the campus," Fazal Raheem Marwat, the university vice chancellor, said, adding he had been on his way to work when he was informed of the attack.

"There was no announced threat but we had already beefed up security at the university."

The gunmen had stormed the campus on its southern side, he said.

Naik Mohammed, security chief at the university, said the attackers had entered close to a campus guest house.