Afghanistan, China, Pakistan and the US 'invite all Taliban and other groups to participate through their authorised representatives in the first round of direct peace talks with the Afghan government' 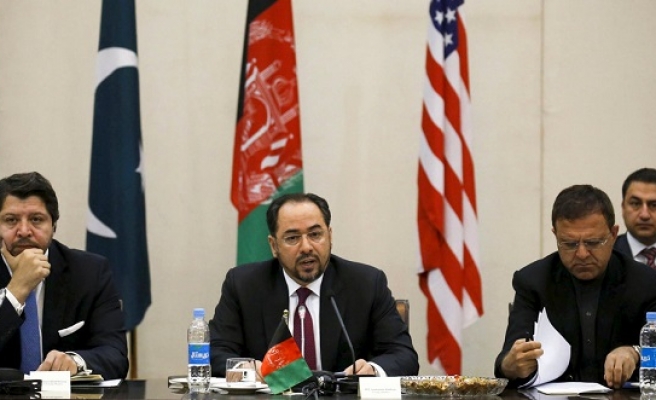 Direct peace talks between Afghanistan and Taliban chiefs are expected to take place by the start of next Monday, Afghan leaders and officials from the United States, China and Pakistan said Tuesday.

Pakistan has agreed to host the talks, said a joint statement by Afghanistan and its three partners in the Quadrilateral Coordination Group after meeting in Kabul.

The four states "invite all Taliban and other groups to participate through their authorised representatives in the first round of direct peace talks with the Afghan government expected to take place by the first week of March 2016," said the statement.

"Pakistan has graciously offered to host this round of talks in Islamabad," it added.

Delegates from Afghanistan, China, the US and Pakistan met in the capital for a fourth round of talks aimed at forming a path back to the nascent peace process, which was interrupted by last summer’s announcement that Taliban leader Mullah Omar had died.

Taliban representatives have been notably absent from the process so far.

Earlier Afghan Foreign Minister Salahuddin Rabbani told participants that he wanted the Kabul meeting to "draft the details of direct talks between the government of Afghanistan and the Taliban before the end of February.

"To end the conflict and bloodshed in the country, the government of Afghanistan once again calls on Taliban groups to take part in peace talks," Rabbani added.

The historic first round of direct talks with the Taliban took place in the Pakistani resort town of Muree last July, but came to a standstill after the insurgents confirmed Omar's death, which had been kept secret for two years.

The announcement, and appointment of his successor Mullah Akhtar Mansour, accentuated divisions among the militants, with many holding Mansour responsible for lying to them about Omar's death.

In 2015 a splinter group formed under Mullah Rasool and challenged Mansour's leadership.

The fresh peace initiative comes as the insurgents wage an unprecedented winter campaign of violence across Afghanistan, underscoring a worsening security situation more than 14 years after they were driven out of power by US-led NATO forces.

The first round of attempts to bring the militants back to the negotiating table began in Islamabad in January, followed by two more meetings in Afghanistan and Pakistan.

Also on Tuesday, President Ashraf Ghani announced he is replacing Rabbani as head the High Peace Council, the government body responsible for negotiating with the insurgents, without specifying the reasons.

Pir Sayyed Ahmad Gailani, an influential leader among the Pashtun who make up a large number of the Taliban, will take his place.