For Sharif, the persistent protests come at a difficult time when his government is already under pressure for not doing enough to tackle deadly floods around the country which have killed 280 people 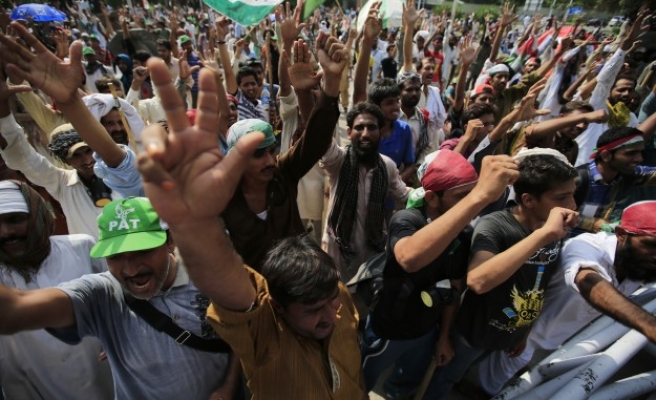 Pakistan's opposition leaders ordered thousands of their supporters on Saturday to resist any government attempt to quash their protests against Prime Minister Nawaz Sharif, deepening a political crisis in the coup-prone nation.

A court in the capital earlier ordered that 100 opposition activists be sent to jail for holding illegal protests and other violations, enraging the protesters who have camped out outside government offices in Islamabad for a month.

Demonstrators led by Imran Khan, a former cricket star, and Tahir ul-Qadri, a firebrand cleric, have been locked in a bitter stand-off with the government for weeks, refusing to leave their protest camp until Sharif resigns.

On Saturday, a crowd of demonstrators gathered outside a court in Islamabad in a protest against its decision to send 100 activists to jail for two weeks, with some trying to slash the tyres of a police van and shouting "Go, Nawaz, go!"

Although the crowd eventually left peacefully after a two-hour stand-off with police, the episode highlighted just how nervous both sides of the conflict remained after talks to resolve the crisis failed several times.

Protest leaders accuse Sharif of rigging last year's election which brought him back to power in a landslide and say they will not back down until he resigns - a demand Sharif has repeatedly rejected.

On Saturday night, the protest camp crowd in the so-called Red Zone - home to Sharif's house, ministries and embassies - swelled to at least 7,000 people, with opposition leaders adamant in their call for the prime minister to resign.

"Pakistan has woken up, our women and children have woken up," Khan told thousands of flag-waving supporters, many of their faces painted in the green and red colours of his party. Some had climbed on lampposts for a better view.

Khan, a flamboyant politician who was among Sharif's main rivals in last year's election, had earlier rejected any idea of talks with government officials, saying he would not abandon his cause until the prime minister resigned.

Although the government has warned it had the right to crack down to disperse the protesters, security forces protecting nearby government buildings looked on and showed no sign of action.

Qadri, the other protest leader, told his supporters to resist any attempt to disperse them.

"If any policeman comes near your sit-in, break his legs," he told the crowd. "They are terrorists. The revolution is near, it's a matter of a few days. The people have woken up."

For Sharif, the persistent protests come at a difficult time when his government is already under pressure for not doing enough to tackle deadly floods around the country which have killed 280 people and affected the lives of two million.

The confrontation turned violent last month, with thousands trying to storm Sharif's house and briefly taking the state television channel off the air.

The army, which has ruled Pakistan for more than half of its history, has stayed out of the conflict, urging both sides to find a political solution.

Yet, some ruling party officials have accused the military itself of instigating the unrest as a way of unsettling Sharif and exerting supremacy over him.

The army has denied it was meddling in civilian affairs, saying it is neutral. Late on Friday, an army spokesman once again repeated that the army had nothing to do with the conflict.

Few commentators think the army wants to seize power again but, even if Sharif survives, he would emerge significantly weakened and likely play second-fiddle to the army on key security and foreign policy issues.