Supporters of Thai Prime Minister Yingluck Shinawatra, the target of weeks of sometimes violent street protests, denounced opposition threats against businesses linked to her family on Saturday ahead of a gathering of their leaders. 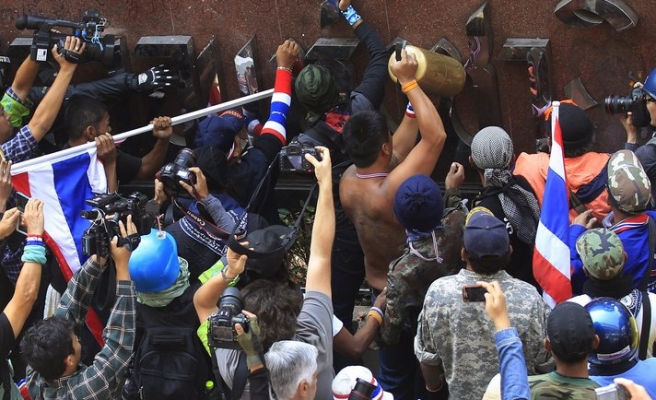 Some Thai anti-government protesters followed the advice of their leader on Saturday, shunning products of firms linked to the family of Prime Minister Yingluck Shinawatra and handing back cellphone SIM cards.

The protesters have blocked main Bangkok intersections with tents, tyres and sandbags, seeking to unseat Yingluck and halt the influence of her billionaire brother, Thaksin Shinawatra, an ousted former premier regarded by many as the real power behind the government.

The company promptly sent a text message to clients saying it no longer had any connection with the Shinawatra family.

"AIS is not involved in politics and is not a pipeline for any side," it said. "Dr Thaksin and family have already sold all shares in the company since 23 January, 2006, and from then are no longer connected with the company."

Aunjit Wongsampan, 65, lined up in central Bangkok to hand in her SIM card.

"I think the signal is poor and I am changing it because the company is too wealthy," she told Reuters.

When shown the company's text message, she said: "I don't believe them any more. I have made my choice."

Yingluck's supporters denounced the targeting of business when the protests have already taken a toll on the economy, on tourism in particular, with arrivals in Bangkok sharply down.

"What we don't like right now is their involvement in threatening companies on the stock exchange that is not involved with government," Tida Tawornseth, chairwoman of the United Front for Democracy against Dictatorship (UDD), told Reuters. "It's a move away from government into business."

The UDD, a protest movement largely made up of "red shirt" Thaksin supporters based in the populous north and northeast, is holding a meeting of its leaders from across the country on Sunday in Nakhon Ratchasima, northeast of the capital.

Generous subsidies for farmers in the north and northeast were a centrepiece of the platform that swept Yingluck to power in 2011, but they have left Thailand with vast stockpiles of rice and a bill it is struggling to fund.

About 500 anti-Thaksin protesters gathered this week outside the Bangkok offices of SC Asset Corp, a property developer controlled by the Shinawatra family, waving Thai flags and blowing whistles.

Yingluck was executive chairwoman of the company before being swept to power in a landslide election victory in 2011.

Tida said Sunday's rally would consolidate plans to restore democracy after the opposition boycotted and disrupted elections this month, leaving the country paralysed under a caretaker government. She ruled out any plans for violence.

"If we wanted to clash, we would have done so a long time ago," she said. "We wouldn't have to wait for this long."

Four protesters and a police officer were killed on Tuesday when police attempted to reclaim protest sites near government buildings. Six people were wounded by a grenade on Friday.

The protests are the latest instalment of an eight-year political battle broadly pitting the Bangkok middle class and royalist establishment against the mostly rural supporters of Yingluck and Thaksin.

Demonstrators accuse Thaksin of nepotism and corruption and say that, prior to being toppled by the army in 2006, he used taxpayers' money for populist subsidies such as the rice scheme and easy loans that bought him the loyalty of millions.

The former telecoms tycoon lives in self-exile to avoid a two-year prison sentence for a graft conviction he says was politically motivated.