Thai court rules to extradite Russian arms dealer to US

A Thai appeals court ruled on Friday that alleged Russian arms smuggler Viktor Bout be extradited to the United States to face charges of supplying weapons to Colombian rebels. 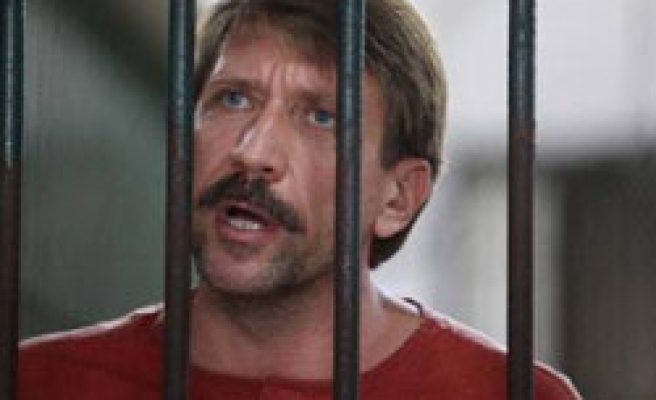 A Thai appeals court ruled on Friday that alleged Russian arms smuggler Viktor Bout be extradited to the United States to face charges of supplying weapons to Colombian rebels.

Dubbed the "Merchant of Death", Bout has been held in a Thai maximum-security prison since his arrest in March, 2008, during a joint U.S.-Thai sting operation in which agents posed as arms buyers for the Revolutionary Armed Forces of Colombia, or FARC.

The appeals court overturned last year's ruling by a lower court that said the FARC was a political movement and not a terrorist group and therefore extradition could not be granted for a political offense. However, the appeals court judge ruled on Friday the case was criminal, not political.

Bout's wife, Alla, accused the Thai authorities of succumbing to pressure from the United States.

"This is a result of constant pressure from the U.S. government," she said, moments after hugging her shackled husband as guards whisked him away.

"This is the most unfair decision because the initial court already said it's a political case," she added before breaking down in tears.

U.S. prosecutors have accused the 43-year-old Russian of trafficking arms since the 1990s, using a fleet of cargo planes to send weapons to Africa, South America and the Middle East.

"No fair trial in US"

In the 2005 movie "Lord of War", the character played by Nicholas Cage is loosely based on the Russian's exploits.

Bout has denied the accusations, saying he ran a legitimate air cargo business and was in Bangkok to discuss selling airplanes to Thais when he was arrested.

In Friday's verdict, the judge said Thailand had similar laws to the United States under which Bout could be charged, meaning Thailand was obligated to extradite him in accordance with a treaty between the two countries.

Bout's lawyer, Lak Nittiwattanawichan, said he respected the court's decision but would lodge a petition with the Thai government asking it to block the extradition.

"The defence believes Bout will not be safe in the U.S. and he will not receive a fair trial," Lak told reporters.