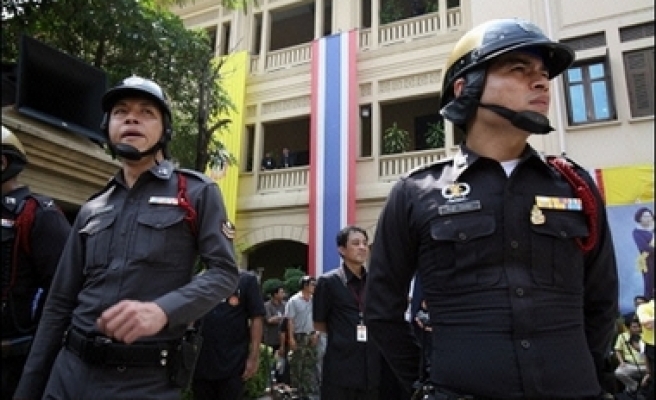 A Bangkok press conference on the deterioration of human rights in Thailand since the military coup was cancelled at short notice Tuesday in the face of threats from the junta -- raising complaints from those taking part that their human rights were now being infringed.

"We condemn the intimidation by security officials and as an advocate of legal and human rights, we shall persist to uphold our duties as a lawyer to protect the people’s rights and liberties," the Thai Lawyers for Human Rights association, one of the organizers, said in a statement issued after the cancellation.

"We shall make an effort to present the report on human rights situation to mark the 100 days after the coup via other channels."

The cancellation was announced barely two hours before the event was due to take place at the Foreign Correspondents Club of Thailand after the junta threatened to prosecute organizers for breaching a ban on gatherings of more than five people.

The local section of Amnesty International and the Cross Cultural Foundation were among organizers, and a foreign lawyer from the International Commission of Jurists was also due to speak.

The three organizations had intended presenting a report titled "Access to Justice in Thailand: Currently Unavailable - Human Rights Situation in Thailand 100 days after the Coup" to outline the deterioration since the May 22 coup. The focus was particularly on the lack of access to justice for victims.

Hundreds of people have been detained in military camps for political reasons since the coup, with almost all released within the seven days maximum detention period authorized by martial law -- which has been implemented across the country.

Two of those detained -- 27-year-old female political activist Kritsuda Khunasen, and student activist Worawut Thuagchaiphum -- claim to have been mistreated by soldiers, alleging that they were subjected to degrading treatment, food deprivation and -- in the case of the student activist -- threats of being killed.

The press conference would have been the first public presentation on human rights since the military took control.

"This direct intimidation… will perpetuate the climate of fear and will lead to further infringement of human rights," said the Thai Lawyers for Human Rights Association in the statement after the ban.

"Such a consequence seems contradictory to the image the National Council for Peace and Order [the junta's official name] has tried to project by claiming that they have been performing their duties with due respect to human rights."

During his regular TV talk last Friday, junta chief Prime Minister General Prayuth Chan-ocha said that he "wanted to move the country towards democracy," but insisted that military control and martial law were necessary because of the persistence of "security problems."

Chan-ocha was elected premier August 21 by the 200-member National Legislative Assembly, which has been hand-picked by the junta and is dominated by military officers.

On Sunday, he appointed a 32-member government composed of active and retired military officers and conservative bureaucrats. Outside of the finance ministries, all key portfolios are controlled by military personnel, including foreign affairs, education and justice.