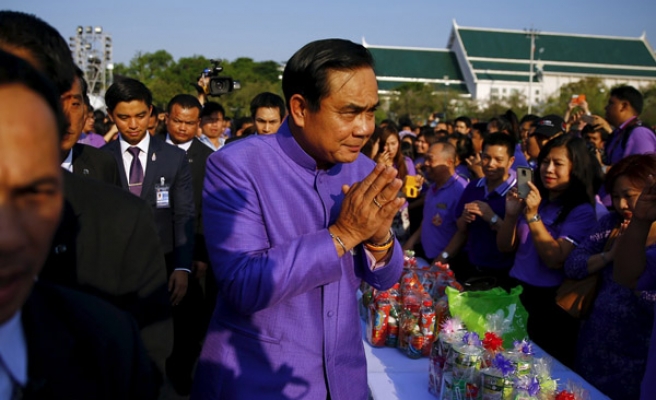 Opponents of the Thai junta defied a ban on political demonstrations Saturday, marching to the military headquarters in downtown Bangkok shouting "long live democracy" and brandishing signs with the slogan “I hate the coup.”

Saturday’s demonstration was organised by the Resistant Citizens -- a movement regrouping opponents to the May 22, 2014 coup which brought the current junta to power -- and the New Democratic Movement, an association of students opposed to the junta.

It was organized in memory of Nuamthong Praiwan, a 60-year-old taxi driver who hanged himself on Oct. 31, 2006 to protest against a previous coup on Sept. 19 of that year.

A few days after that coup, Praiwan drove his taxi at full speed against a tank deployed for the putsch in central Bangkok. He was hospitalized and became a symbol of resistance.

Demonstrator Phayao Akahad -- an activist whose daughter was killed by military snipers during anti-government demonstrations in 2010 -- said in a speech that, “Nuamtong is someone very important in the history of Thailand.”

“Without him, we could not be here today."

"The people are the owners of the country, but the military have never shown any respect for the feelings of the people,” she added, cheered on by a crowd of around 200 people.

The anti-junta demonstration was only the second since July 2014, when military forces were deployed across the capital city to stifle political gatherings which had flourished in the immediate aftermath of the coup.

Around 100 police officers observed the march, which departed from a memorial to the victims of a massacre perpetrated by the then-junta in 1973, crossed the historic heart of the city and stopped in front of the army headquarters.

There, demonstrators sat and read poems in honour of Praiwan, with some holding a banner bearing the words, “How many more Nuamtongs, how much more suffering, before we get democracy?”

Phra Uthai Aruno, a Buddhist monk, told Anadolu Agency, “I joined the demonstration because I believe in democracy. I don’t want that someone control me."

“The country means, above all, the people. But here the people have no rights."

There was no violence during the demonstration, despite a few tense moments when protesters tried to get close to the gate of the military headquarters.

Since the 2014 coup, the junta has stifled freedom of expression and banned political gatherings and most academic debates related to politics.

Initially, it said elections would be held towards the end of 2015, but this was later postponed to Sept. 2016.

After the rejection last month by the National Reform Assembly of a first draft constitution, the election deadline is now mid-2017.

In parliament Wednesday, junta chief Gen. Prayuth Chan-ocha threatened to “close the country” and “stay longer in power if there is no peace and order”.