Spokesperson for Thai military government insists objective is 'not to destroy' but 'strengthen' democracy. 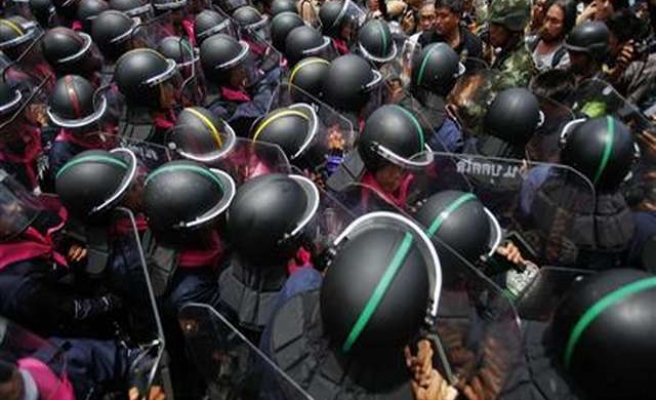 The Thai junta has strongly defended the May 22 military takeover as "a path to a stronger democratic system," while begging journalists not to use expressions like “coup” or “detentions” in reference to those "summoned" to military camps.

In its first confrontation with international media, a spokesperson for the junta insisted late Wednesday that the military's objective is “not to destroy” but “strengthen” democracy.

“The executive, legislative and judiciary branches of government had been undermined by the political situation," said Colonel Werachon Sukondhapatipak, in an effort to explain why General Prayuth Chan-ocha had overthrown the civilian government elected 2011.

"The government had become paralyzed, resulting in problems for the country and the economy.”

Sukondhapatipak was speaking to journalists in Thai capital Bangkok at a packed Foreign Correspondents Club of Thailand.

Since November, anti-government protesters had taken to the streets, first to denounce an amnesty bill that would have allowed former Prime Minister Thaksin Shinawatra – a divisive figure in Thai politics – to return from exile, and then to call for the government to be dismissed.

Protesters disrupted February 2 elections, which were later nullified by the Constitutional court, the same court then removing then-Prime Minister Yingluck Shinawatra, Thaksin’s sister, for abuse of power May 7. The government, however, survived, Yingluck succeeded by one of her ministers, who was then overthrown in the coup.

“Some people assume that elections are the answer for the crisis," continued Sukondhapatipak. "We allowed elections but it did not work. Having elections with armed soldiers protecting the ballot boxes is not the democracy that we want. We want something sustainable, a more mature democracy.”

While trying to maintain his composure, the military officer appeared visibly uncomfortable with questions relating to the arrest of activists, corruption within the military or assaults on freedom of expression.

To an insistent reporter, he said: “I am asking you to listen to me.”

Semantics were a popular subject. Words such as “coup” or “detention” were considered inappropriate by the military spokesman.

“This is not a coup, but a change in administration in order to move the country forward,” he underlined.

Similarly, he asked reporters to “come up with a better word than detention” to refer to the activists, academics and journalists who have been summoned and kept in military camps.

“Detention is a scary word," he said. "We provide them good food, air condition, activities and entertainment. We just try to convince them to put their country's interests before their own.”

According to Sukondhapatipak, “around 300 people have been summoned” and “not more than 15 remain in army accommodation.”

As for those arrested for breaking martial law - such as activist and protest leader Sombat Boongamanong, who was detained last week - “they will be [simply] dealt with according to the law.”

According to a human rights organization - which did not want to be identified for fear of reprisal - at least 384 people have been summoned in written orders by the junta, and more than 100 of remain in detention.

In a statement published this week, Human Rights Watch also stated its concern for a 27-year-old Red Shirt - or pro-Thaksin - political activist, Kritsuda Khunasen, who was arrested May 28 and not heard of since. The military has refused to provide information on her whereabouts to her family.

“The Thai junta’s detentions are exacerbated by holding people in secret. Kritsuda and all the others held without being charged with a credible offense should be freed immediately,” said Brad Adams, the NGO's Asia director.