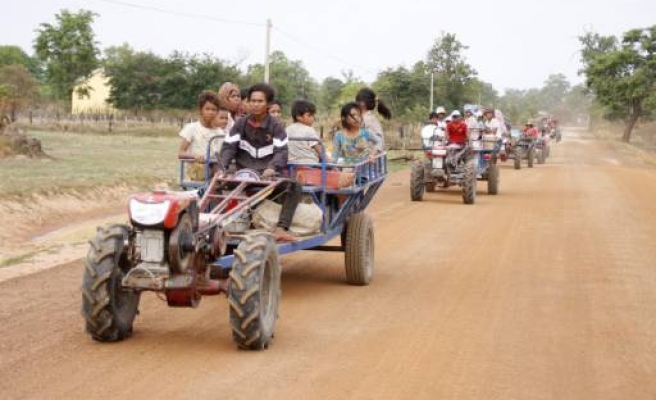 Thousands of Cambodians were left stranded on the Thai-Cambodian border overnight after the Thai Junta said in a surprise announcement that it would arrest and deport all irregular foreign workers.

The laborers - half of them women and children - were too poor to afford the migration fee, and were only able to cross when Cambodian authorities arrived with around 200 trucks to clear the backlog.

"We got phone calls from people there that they're really concerned about their safety, but they don't know how to get back because they're scared if they leave the house they might be shot or arrested."

Cambodian media reported Friday that a local rights group had said nine of the Cambodians had been shot dead, but the number could not be confirmed.

The junta's stringent measure has been seen by analysts as an attempt to "foster unity" among quarreling Thais by switching the country into nationalistic mood by placing emphasis on its much criticized neighbor.

Thailand remains under tight security measures following the May 22 military coup. Despite a prominent nationalist campaign to sew public unity and "bring happiness back to the Thai,” little ground has been made between pro- and anti-democracy movements, and demonstrations against the junta remain - although they have been restricted to small sporadic protests.

A spokesman for the International Organization of Migration (IOM) told AA Friday that the situation at the Poipet crossing had been chaotic Thursday night, but the trucks had relieved some of the pressure.

“In the last few days, a few thousands were crossing the border daily, but yesterday, it was 15,000 and we don’t know how many more will come,” Joe Lowry, said from the crossing. He estimated 25,000 have arrived since last Saturday.

“Some are being brought on trucks, some come by themselves,” he added.

Between 2-3 million migrants - mostly from Cambodia, Myanmar and Laos - work in Thailand, providing the bulk of manpower in economic sectors - in particular, the fishing, seafood and construction industries - where Thais are no longer economically willing to work.

They are usually paid between 33-50 percent of average Thai salaries for the sector, but according to aid organizations half of them work illegally. Most arrived in Thailand when the demand for foreign labor was high due to a booming economy.

With the Thai economy on the verge of recession after a 2.1 percent drop in the first quarter of 2014 compared to the previous, many of these workers are becoming dispensable.

However, the deportations also fit the junta's nationalistic agenda. Cambodian migrants have often been accused by pro-military factions of being hired to swell the ranks of the Red Shirts, the supporters of former Prime Minister Yingluck Shinawatra, whose government was overthrown in the May 22 coup.

The chairman of a Thai human rights organization who had no wish to be identified for fear of reprisal said that such actions should be expected of the military.

"They have been pushing people back to the borders for years. It is a mindset they have all the time,” he said. “I am really amazed by the mindset... Their consistent line is this aim of 'Thailand for the Thais’.”

A week after the coup, the Thai military showed its first signs of trying to instill patriotism into the minds of its citizens by setting up a 130-meter fence in a disputed border area near the pre-angkorian Cambodian temple of Preah Vihear - for long a violent flashpoint between the two countries, and in violation of a bilateral agreement.

Foreign reporters have not been spared, having been called “scoundrels” by a military officer on a loudspeaker during an anti-coup demonstration - although the military later tried to excuse the incident by saying an imposter had jumped on a military truck.

Free screenings of the movie “King Naresuan”, a heavily patriotic epic about a 16th century Siamese king who defeated Burmese invaders, have also been organized across the country.

The junta has also produced short films encouraging "the people" to stand still during the national anthem to show “respect for the forefathers.”

"We hope the Thai government [junta] treats Cambodians with humanity and according to the law."