The crisis broadly pits members of Bangkok's middle-class and southern opposition supporters, backed by the royalist establishment, against the largely rural supporters of Yingluck and Thaksin. 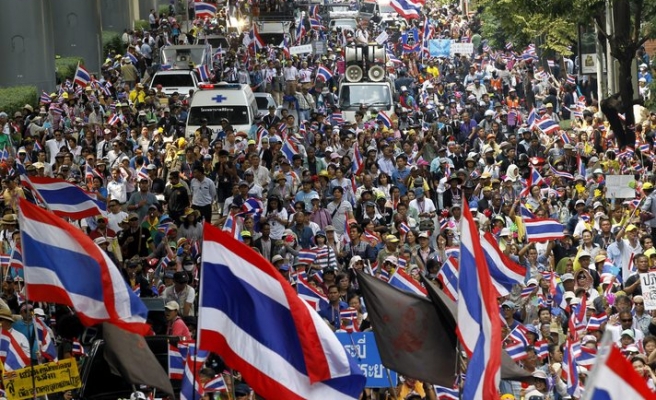 A senior Thai minister rejected a proposal for talks from the leader of an anti-government protest movement on Friday as demonstrators rallied at ministries to put pressure on Prime Minister Yingluck Shinawatra to step down.

Protest leader Suthep Thaugsuban had suggested that he and Yingluck should hold a televised debate.

"Yingluck is the legitimate leader of the country and Suthep is a man with warrants for his arrest who heads an illegal movement. The prime minister should not talk to Suthep," said Labour Minister Chalerm Yoobamrung, who oversees a state of emergency imposed last month.

"Suthep is only proposing negotiations, even though he dismissed them before, because protest numbers are dwindling."

The protesters have blocked big intersections in the capital, Bangkok, since mid-January and forced many ministries to close as part of a four-month campaign to push out Yingluck and eradicate the political influence of her brother, ex-premier Thaksin Shinawatra, seen as the real power in Thailand.

Violence is on the increase, with almost daily gun and grenade attacks around protest sites by unidentified people, and 23 people have been killed since November.

Thailand's powerful army chief, asked by reporters on Friday whether the violence would trigger a military coup, remained noncommittal and expressed exasperation at the same question being put to him all the time.

"We must not discuss this every day," he said. "I can't promise whether there will be a coup or not."

However, in a speech to supporters later, he showed his more combative side, blaming Yingluck for weekend attacks on protesters in which five people were killed, including four children.

"You have murdered four young, innocent children, Yingluck," he said, challenging her supporters in the rural north and northeast of the country to a fight in the capital.

"Come to Bangkok and try to start a civil war," he said. "Let's see who can assemble more people, come on."

Yingluck, speaking from the northern city of Chiang Mai, gave a guarded response to the idea of a debate.

"The talks have to have a framework, though I am not sure what that framework would look like," she said on Thursday.

Talk of a possible civil war has picked up recently.

"I don't think it will get that bad. Thais are hot-blooded...so we must control the situation using the law," Prayuth said.

The crisis broadly pits members of Bangkok's middle-class and southern opposition supporters, backed by the royalist establishment, against the largely rural supporters of Yingluck and Thaksin.

After a period of calm following Yingluck's election win in 2011, opposition swelled when her government tried to push through a political amnesty that would have let Thaksin return from self-imposed exile without having to serve a jail sentence for graft. He says the charges were politically motivated.

Thaksin was toppled by the army in 2006. The military has tried to stay above the fray this time but Yingluck is still facing multiple challenges from the courts, which threw out two governments allied to Thaksin in 2008.

On Thursday, she was formally served with charges of negligence relating to a government rice subsidy programme that has failed disastrously, leaving hundreds of thousands of farmers unpaid and costing taxpayers billions of dollars.

Yingluck faces removal from office and a five-year ban from politics if she is found guilty. She has until March 14 to try to refute the charges, after which the anti-corruption agency will decide whether to take the case further.

She called an election for Feb. 2 to try to end the crisis but it was disrupted by the protesters.

The Election Commission will try to hold polls on Sunday in five provinces where voting was not completed. Election re-runs planned for April in other provinces has been suspended pending a court decision on procedures.

The protesters want to set up a "people's council" of unspecified worthy people to force through political and electoral changes before a new general election is held, hoping that will stop parties loyal to Thaksin from winning.

Although Suthep still manages to draw big crowds when he marches around the city, the number of protesters has dwindled and many ministries have been able to reopen.

Critics have accused the military of siding with the protesters, a charge denied by army chief Prayuth.

Sophon Pisutwong, a police commissioner with the body overseeing a state of emergency in Bangkok, said 63 out of 82 ministries and state agencies had reopened completely or partially, including the Finance Ministry, although some of its officials were working from backup locations as a precaution.

The protracted crisis has hurt confidence and domestic demand. Data from the Industry Ministry on Friday showed factory output fell 6.41 percent in January from a year before.