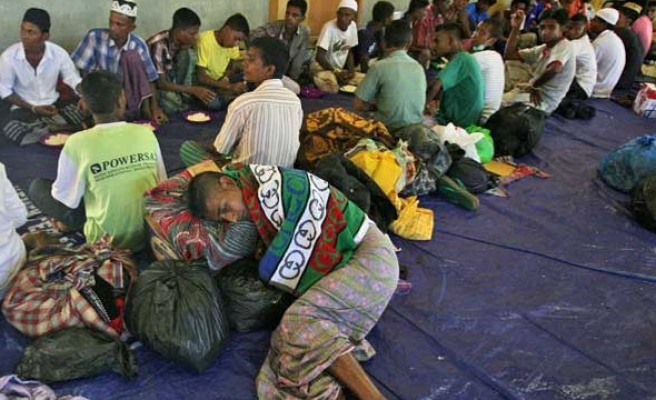 A Thai navy commander has been charged with human trafficking after he was accused of accepting bribes to turn a blind eye to the smuggling of Muslim Rohingya along Thailand's western Andaman coast, according to a local media report.

Phuketwan reported Monday that Commander Kampanart Sangtonggeen and three army captains are said to have deliberately avoided intercepting migrant vessels, but then received money from middlemen who handed them over to traffickers.

For many years, Thailand's western seaboard has been popular with traffickers of Rohingya from Myanmar, but following the discovery of over 30 corpses in jungle camps in Thailand's south May 1 authorities launched a crackdown, leading to the arrest of numerous suspects - including a Thai general.

In the months following, trafficking boats unable to land stayed at sea, provoking a regional humanitarian crisis only solved May 20 when Malaysia and Indonesia agreed to let Rohingya come ashore and to accept them as refugees.

Phuketwan - whose two senior reporters were found innocent Sep. 1 of defaming the Thai navy in a 2013 report on the smuggling of Rohingya - underlined Monday that the charges illustrated the involvement of Thai officials.

Such officials have been implicated by rights groups as colluding with human smugglers preying on the majority-Muslim Rohingya as they flee persecution described by some human rights groups as "state sponsored" in Myanmar.

Those arrested since the clampdown include police officers, local officials and a former provincial official considered "a human-trafficking kingpin".

Charges of criminal defamation and a count of violating the Computer Crime Act had been brought by the navy against Alan Morison, a veteran Australian journalist and Phuketwan editor, and Chutima Sidasathian, a 34-year-old Thai journalist working for the website.

On Monday, Phuketwan - which has worked extensively to highlight human smuggling and trafficking networks in Thailand's south - called on all senior officers who have held positions along the coast and in the south over the past five years to voluntarily open their bank accounts to investigators.

"The network of corruption involving boat people has involved many billions of baht," Morison said.

"The way for Thailand to now clear its name is to open the bank books of everyone involved to establish their innocence. This is something that all good officers should be prepared to do, voluntarily."

It added that navy statistics illustrate that very few vessels were apprehended -- instead the navy often "helped them on" to other destinations.