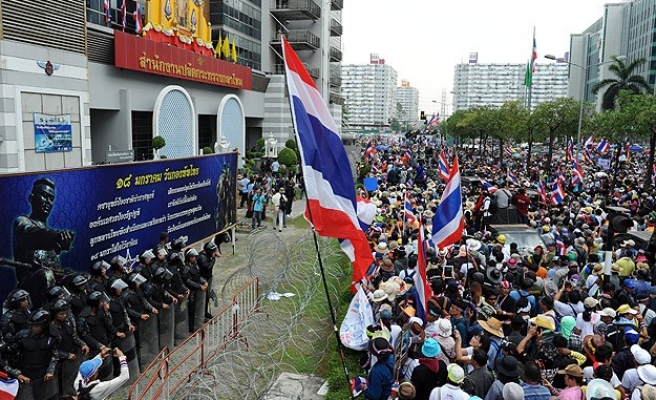 Thai opposition leader Abhisit Vejjajiva met the head of the armed forces on Monday to discuss ways to avert a potential showdown between political groups next month that threatens more violence and further economic damage in a six-month crisis.

"He (Thanasak) supports what I want, which is to bring all sides together to find a way out for the country," Abhisit told reporters after the two-hour meeting. "The commander underscored that political problems must be solved through political means."

Prime Minister Yingluck Shinawatra has faced months of anti-government protests aimed at removing her to make way for an unelected "people's council" that would oversee reforms to tackle alleged graft and rid the country of the influence of her brother, former premier Thaksin Shinawatra.

The protesters accuse former telecoms tycoon Thaksin of corruption and nepotism, which he denies. Thaksin was ousted in a 2006 military coup and lives in self-imposed exile to avoid a jail sentence handed down in 2008.

The military, which has intervened frequently in politics in the past, has stayed out of the fray this time, although its leaders have said they will intervene if violence worsens.

Twenty-five people have been killed in politically related violence since the unrest began in November, most of them in shootings and grenade blasts.

The turmoil has dented business confidence, especially as Yingluck has headed a caretaker government with limited powers since dissolving parliament in December.

Data on Monday showed that industrial output in March was 10.4 percent lower than in March last year..

The central bank has warned that the economy could contract in the first quarter compared with the final three months of 2013. It has cut its 2014 growth forecast several times and said last week it would probably fall short of its most recent forecast of 2.7 percent.

A controversial amnesty bill that could have allowed Thaksin to return without facing jail time helped kick-start the protests by the People's Democratic Reform Committee (PDRC) last year, which soon turned into a movement to remove Yingluck.

The long-running crisis broadly pits the mostly poorer supporters of Yingluck and Thaksin against the Bangkok-based middle class and conservative establishment.

The demonstrations have waned in recent weeks but that has not deterred protest leader Suthep Thaugsuban, who has promised a "final push" to oust Yingluck in May.

The protesters are now banking on a set of legal cases that could lead to Yingluck's removal from office within weeks.

She has been charged with abuse of power for her transfer of National Security Council chief Thawil Pliensri in 2011, which opponents say was done for personal and party political reasons. If found guilty, she may have to step down.

Yingluck has until Friday to present her defence.

She also faces charges of dereliction of duty over a state rice subsidy scheme that has incurred billions of dollars in losses and left hundreds of thousands of farmers unpaid.

So far, opposition leader Abhisit's proposal for an election to take place alongside political reforms has met with a lukewarm response from both pro-government "red shirt" leaders and protest leader Suthep.

The protesters disrupted a Feb. 2 general election, which was nullified by a court in March, and insist there should be no new vote until reforms are in place.

"As long as this putrid regime festers, our country cannot heal and move on," Suthep told supporters on Sunday.

A cabinet meeting on Monday was set to extend an Internal Security Act in Bangkok and surrounding provinces by another two months. It allows the authorities to impose curfews, operate checkpoints and restrict the movement of protesters as needed.

However, it has done little to curb the protests and the government has been reluctant to use force against protesters for fear of a backlash.

Adding to escalating tensions, leaders of the red shirt movement plan a series of rallies in the provinces this week to show their support for the government. They have vowed to protect Yingluck if it looks like she will be forced out.