Yingluck's office told reporters she was not in Bangkok and asked media to follow a convoy outside the city to where they said Yingluck was "undertaking official duties". 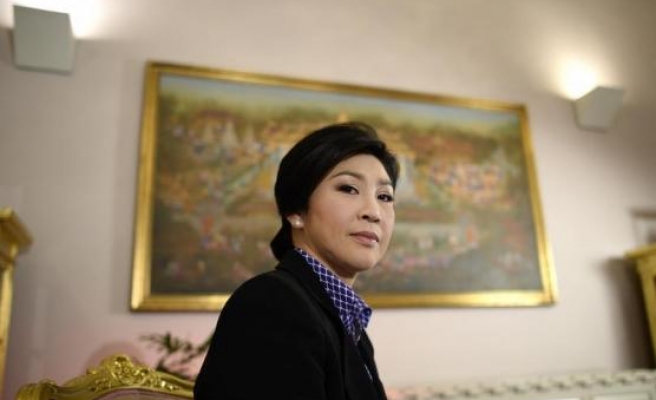 Thai Prime Minister Yingluck Shinawatra, the target of anti-government protests in Bangkok, has been staying outside the city and on Monday ruled out resigning despite a series of deadly attacks heaping pressure on her administration.

Yingluck, who attended a trade show in Saraburi province, 100 km (60 miles) north of Bangkok, called for dialogue to resolve a crisis that has dragged on for months, with key intersections in the capital blocked by protest camps.

"It's time all sides turned to talk to each other," Yingluck told reporters. "Many people have asked me to resign but I ask: is resignation the answer? What if it creates a power vacuum?"

The protests have been punctuated by gunfire and bomb blasts, including one on Sunday that killed a woman and a young brother and sister.

They are aimed at unseating Yingluck and erasing the influence of her brother, former premier Thaksin Shinawatra, who is seen by many as the power behind the government.

Yingluck's office would not confirm how many days Yingluck had been working outside the capital.

She was last seen in public in Bangkok nearly a week ago, last Tuesday, when both anti-government protesters and farmers angry about not being paid under a rice subsidy scheme were trailing her and some of her ministers.

She is due to attend a corruption hearing in Bangkok on Thursday.

"It is highly likely that we will hold the cabinet meeting outside of Bangkok," Surapong told reporters.

The political crisis, which pits the mainly middle-class anti-government demonstrators from Bangkok and the south against supporters of Yingluck from the populous rural north and northeast, shows no sign of ending soon.

But the army, which toppled Thaksin in 2006 in the latest of 18 coups or attempted coups since Thailand became a constitutional monarchy in 1932, said it would not interfere.

"Somebody has to take responsibility but that doesn't mean soldiers can intervene without working under the framework (of the law)," army chief Prayuth Chan-ocha said in a rare televised address, also calling for dialogue.

"How can we be sure that if we use soldiers, the situation will return to peace?"

Protesters, who disrupted and boycotted this month's general election, have been urged by their leader to target businesses linked to Thaksin and gathered outside a television station on Monday managed by Thaksin's son.

The Election Commission had said it would try to complete the election process in late April, but has since suspended that date pending a court decision, leaving the country in limbo under a caretaker government with limited powers.

It was not immediately clear who was responsible for Sunday's bomb blast in a busy central shopping district, but the polarisation of Thai society raises the possibility of wider civil strife.

The six-year-old sister of a boy killed in the attack died on Monday, doctors said, taking the death toll to three.

Each side has accused the other of instigating violence, while armed provocateurs have a history of trying to stir tension. Protesters and the police have blamed violence on shadowy third parties.

Yingluck described Sunday's attack, and one on Saturday in the eastern province of Trat in which a five-year-old girl was killed, as terrorism.

At least 20 people have been killed and hundreds wounded since the protests began in November, according to the Erawan Medical Center, which monitors hospitals.

They are the biggest since deadly political unrest in 2010, when Thaksin's "red shirt" supporters paralysed Bangkok. More than 90 people were killed and 2,000 wounded during that unrest, which ended when troops moved in.

Demonstrators accuse Thaksin of nepotism and corruption and say that, prior to being ousted in 2006, he used taxpayers' money for populist subsidies and easy loans that bought him the loyalty of millions.