Talks with Buddhist monk Luang Pu Buddha Issara, a protest leader, failed to free up an occupied government complex in the north of the capital 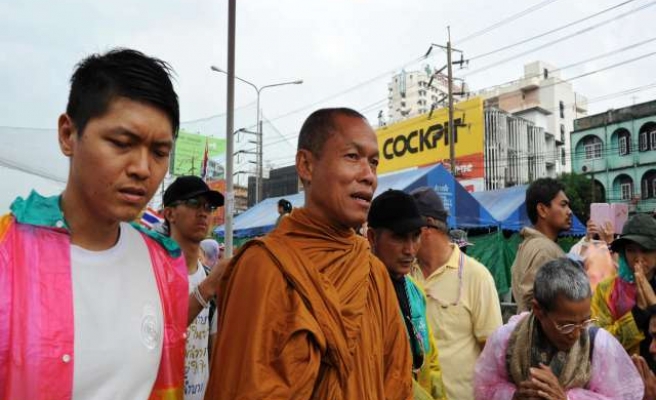 Thai police and a prominent protest leader failed to reach a deal on Sunday to reopen state offices and roads in Bangkok that have been occupied for months by protesters seeking to overthrow Prime Minister Yingluck Shinawatra.

Talks with Buddhist monk Luang Pu Buddha Issara, a protest leader, failed to free up an occupied government complex in the north of the capital as a third day of a security operation designed to retake sites occupied by protesters drew to a close.

Buddha Issara said the government was using a request to reopen roads as an excuse to crack down on protesters.

"If there is blood loss...will the authorities take responsibility? Or will you blame it on provocateurs?," Buddha Issara asked police representatives.

Speaking to the monk during a televised video conference, Naret Nanthachot, commissioner of Provincial Police Region 1, said police would not use force.

"I am asking for your kindness and understanding...tens of thousands of people are frustrated each day by their inability to use roads," said Naret.

Both sides agreed to talk at a later date.

Hundreds of riot police began an operation to reclaim key intersections and state buildings in Bangkok on Friday in what authorities said would be a slow operation to take back areas that have been occupied by protesters for several weeks.

Labour Minister Chalerm Yoobamrung, who is charge of the operation, said the government would continue with its operation and try to reclaim five protest sites next week.

"This gathering has caused distress to others...that's why we have to reclaim the sites starting next week," Chalerm said at a news conference on Sunday.

The security operation has so far avoided larger sites in the city centre occupied by the main protest group, the People's Democratic Reform Committee (PDRC), focusing instead on state offices on the outskirts of Bangkok.

Authorities say the protest movement is dwindling in size, giving security forces an opportunity to try to re-open major thoroughfares and remove barricades that have blocked access to ministries and prevented the government from functioning fully.

Security forces put up little resistance when protesters moved to occupy ministries and major intersections over the past few months, but despite efforts to show restraint 11 people have been killed and hundreds hurt in sporadic violence since the protests began in November.

The protests are the latest episode in an eight-year conflict that broadly pits Bangkok's middle class and royalist establishment against supporters of Yingluck and her brother, former premier Thaksin Shinawatra. An election on February 2 failed to break the deadlock.

Protesters, aligned with the opposition Democrat Party, blocked voting in a fifth of constituencies, a result that left parliament without a quorum to approve a new government.

The protesters are demanding that Yingluck resign to make way for an appointed "people's council" to overhaul a political system they say has been tainted by her brother, who lives in exile abroad to avoid a jail term for graft.

Thailand's Election Commission will meet with government representatives on Monday to discuss how to complete voting that has been marred by violence and resistance from protesters.

The commission has said it will try to hold elections on April 27 in areas where the February vote was disrupted.

Prompong Nopparit, an adviser to Yingluck's party, said at a news conference that the commission needed to ensure voting can take place by late April to avoid propelling Thailand even deeper into crisis.

"If the Election Commission doesn't listen to all sides...this might be detrimental to Thailand and the election may be voided," said Prompong, echoing sentiments expressed by commission member Somchai Srisutthiyakorn that the whole vote may need to be re-run.

The commission has been locked in a public dispute with the government over who has the authority to call the elections for the rest of the seats and whether the polling date has to be endorsed by the king.

Adding to Yingluck's troubles, judicial cases have been piling up against her party, most prominently an investigation into a rice subsidy scheme for farmers that become one of the biggest threats to her grip on power.

The scheme won her millions of votes in the country's rural heartland and helped sweep Yingluck to power in 2011 but allegations of mismanagement have left her government scrambling to find 130 billion baht ($3.99 billion) to pay some 1 million farmers.

Thailand's National Anti-Corruption Commission said last week it expects to file formal charges against Yingluck for her role in the rice scheme later this month.