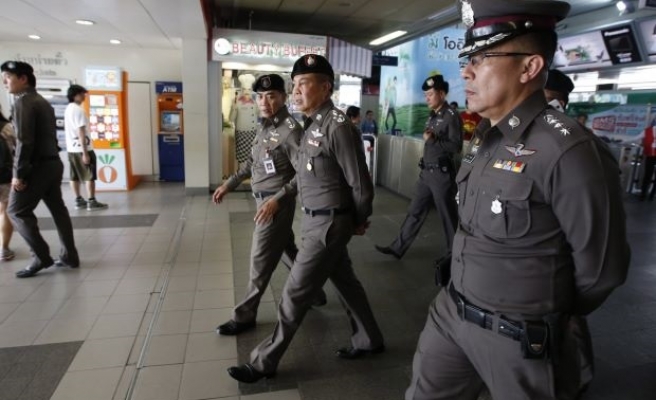 Police probing Thailand's deadliest bombing widened their search for more suspects on Sunday after a foreigner was arrested and stacks of fake passports and bomb-making materials found during a raid on a Bangkok apartment block.

Authorities said police were monitoring about 1,000 mobile phone numbers and checking photographs used in some 200 seized passports to track down members of an unspecified group they believe orchestrated the Aug. 17 attack on a Hindu shrine in Bangkok. The bombing killed 20 people and stunned Thailand.

Fourteen foreigners, seven from mainland China and Hong Kong, were among those killed in a blast the ruling junta said was intended to cripple an already flagging Thai economy.

Police have not released the identity or nationality of the 28-year-old man they arrested on Saturday. They believe he was also involved in a second, smaller bombing in the Thai capital a day after the attack at the crowded Erawan Shrine, to which Thais and Asian tourists flock daily.

The man is being held on charges of possessing illegal explosives and has been in Thailand since January 2014.

"We're not only using information about phone usage from this man, but also usage of the group," police spokesman Prawut Thavornsiri told Channel 3 television.

Prawut did not elaborate on what group that might be.

Police have been criticized for an erratic investigation that had, until this weekend, uncovered few clues about who was behind the blast. No group has claimed responsibility.

Prawut declined to say how many suspects were being sought and said police still believe the arrested man could be the yellow-shirted individual with shaggy dark hair picked out on a surveillance camera leaving a bag at the site of the blast.

Police and residents in Bangkok's Nong Chok district said the suspect rented four rooms on the same floor of the rundown building.

A man and woman living on the same floor told Reuters the suspect did not live alone and they had seen a taller man with similar appearance entering and leaving several times each day. They had not seen the second man since Friday.

"We've seen two of them, frequently. One was the arrested man, but there's another, he's much taller," said the man, who requested anonymity because he feared for his safety.

The detained man was reclusive but always appeared focused and walked with intent. They said he was often seen on his knees praying outside the room.

"I still fear danger," the woman said. "We don't know if the other man has been arrested."

With scant progress made and questions about the scope of the police investigation, speculation has focused on groups that could have the motive and capability to carry out the bombing.

Many of the minority Uighurs from China's far west have sought passage to Turkey via Southeast Asia.