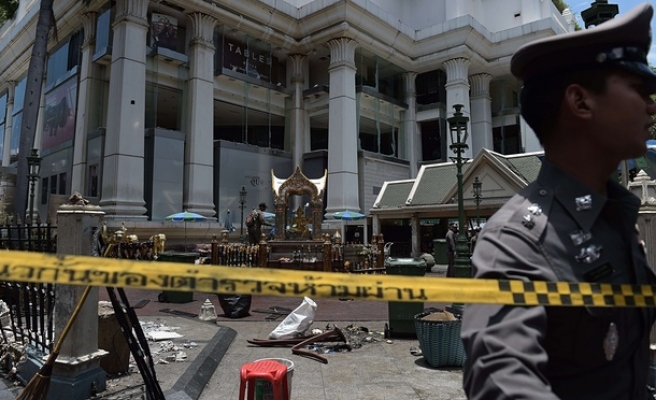 Thai police have shifted the focus of their investigation into a bombing that killed 20 people, saying Monday that the blast was partially inspired by domestic politics -- two weeks after they first linked it to the deportation of 109 Uighur to China.

​Police Chief Somyot Poompanmoung told reporters that one of the Thai suspects -- "Odd Yuthapong" -- was known to have been involved in a domestic political bombing last year.

"Because of Odd Yuthapong's involvement in the case, we cannot rule out domestic terrorism as one of the motivating reasons for the bombs," he said.

Meanwhile, Police Gen. Chaiyapol Chatchaidech told reporters that the bombing was carried out by two teams of people working together.

"There are 17 suspects total, working out of two apartments with two Thai nationals involved," he said.

On Monday, the Bangkok Post reported that police had asked that the passport of another Thai suspect -- Wanna Suansan -- be revoked as she had failed to answer a police summons.

The 25-year-old's family lives in southern Phangnga province, where the majority of the rural population is Muslim.

Her husband is a Turkish national and she initially told her family that she is now in Kayseri, in central Turkey, but offered no proof.

The police chief underlined Monday that the primary motivation for the bombing was still thought to be a crackdown on trafficking by the government earlier this year that disrupted a network used to ferry Uighur from China to Turkey via Thailand.

The Uighur are a Muslim Turkic minority from northwestern China who claim their cultural and religious rights are curtailed by the Chinese authorities. Thousands have fled with the aid of people smugglers, some to settle in Turkey.

He added that that the two Uighur suspects in custody -- Adem Karadag and Yusufu Meraili -- had confessed to the bombing after being presented with "insurmountable evidence."

"Both suspects confessed to the crimes as we presented them with so much evidence that they could not deny their involvement."

On Monday, Karadag's lawyer Choochart Khanphai -- who refers to his client as Bilal Muhammed -- attended the prison where Karadag is being held with an Anadolu Agency correspondent, only for both men to be told that the case is to be moved from a civilian court to a military court and the lawyer would need to refile paperwork in order to see his client.

Khanphai has told Anadolu Agency that he had not been able to see Muhammed since last Wednesday, prior to the "alleged" confession.

He claimed that the allegations “did not add up”, noting that his client had been interrogated through the night last week -- just one day after being hospitalized -- and that his client was not even in the country at the time of the bombing.

“My client has said he arrived in Thailand on Aug. 21, days after the bombing,” he said. "Muhammed was passing though Thailand to Malaysia, where he was looking for a job."

“Muhammed knows nothing whatsoever about the bombing,” he added.

Despite being found in possession of a fake Turkish passport bearing his image and the name Karadag, Khanphai says his client is in fact Turkish, and has been living in Istanbul for the past ten years.

Poompanmoung said Monday that police were working with the Turkish embassy in Bangkok to determine his nationality.

The deportation to China of 109 Uighur in July saw families separated, husbands taken away from wives and fathers and mothers from children.

As a chorus of protests by international organizations and foreign governments against Thailand’s decision to send the group to Beijing grew, a further group of eight women and children were also sent to Turkey.

The reaction to the deportation was particularly strong in Turkey, where a group of pro-Uighur people vandalized the Thai consulate in Istanbul on July 9.