The protesters closed camps at two of the seven big intersections that Suthep's supporters have blockaded since mid-January, at Victory Monument and Lat Phrao, and were heading for the fringes of the central oasis of Lumpini Park. 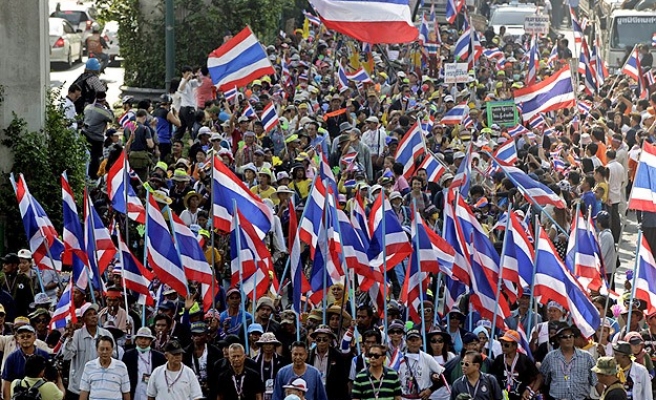 Thai anti-government protesters who have been camped out in north Bangkok packed their tents and were marching downtown on Monday as they consolidated efforts to topple Prime Minister Yingluck Shinawatra, a day after a disrupted general election.

Some joined protest leader Suthep Thaugsuban on foot and others followed in cars and six-wheel trucks as Thailand's long-running political conflict showed no sign of ending.

Others surrounded a government office in north Bangkok, where Yingluck was holding a meeting.

The protesters closed camps at two of the seven big intersections that Suthep's supporters have blockaded since mid-January, at Victory Monument and Lat Phrao, and were heading for the fringes of the central oasis of Lumpini Park.

A third camp run by an allied group at a huge government administrative complex may also be closed.

Suthep said on Sunday this was being done out of safety concerns, but it could also be because their numbers are dwindling. Reuters put the number of marchers at about 3,000.

"Backdoor negotiations are needed because both sides will avoid any direct confrontation in public view. The business lobby should revive its efforts to play the intermediary role."

Suthep's supporters on the route showed no sign of crumbling, waving flags and handing over money.

The demonstrators blocked balloting in a fifth of the country's constituencies on Sunday, saying Yingluck must resign and make way for an appointed "people's council" to overhaul a political system they say has been taken hostage by her billionaire brother and former premier, Thaksin Shinawatra.

The election, boycotted by the main opposition party, is almost certain to return Yingluck to power and, with voting passing off peacefully across the north and northeast, Yingluck's supporters will no doubt claim a legitimate mandate.

But the vote is unlikely to change the dysfunctional status quo in a country popular with tourists and investors yet blighted by eight years of polarisation and turmoil, pitting the Bangkok-based middle class and royalist establishment against the mostly poor, rural supporters of the Shinawatras.

"WE WILL GATHER ONCE MORE"

The election was peaceful, apart from a few scuffles, with no repeat of the chaos seen the previous day, when supporters and opponents of Yingluck clashed in north Bangkok. Seven people were wounded by gunshots or explosions.

The protesters have rallied in Bangkok since November to try to oust Yingluck. They wanted electoral rules rewritten before any election and have vowed to keep up the protests.

"I'm confident this election won't lead to the formation of a new government," Suthep told supporters late on Sunday.

He said it was premature for ministers to say the vote had gone smoothly.

"We will gather en masse in Bangkok once more but, before then, we will deal with Yingluck and other ministers. We will surround their houses until they cannot leave," he said.

Giving provisional data on Monday, the Election Commission said 20.4 million people cast their vote on Sunday, just under 46 percent of the 44.6 million eligible voters in 68 of 77 provinces. In the other nine provinces, no voting was possible.

Voting was disrupted in 18 percent of constituencies, 67 out of 375, the Commission said, revising data given Sunday.

It is unclear when voting will be held there and it could be weeks before parliamentary seats are filled, so Yingluck will remain a caretaker premier with no policy authority, unable to approve any new government spending.

"Having gone through more than two months of protests, the election will strengthen Yingluck's position, but her troubles are not over yet," said Kan Yuanyong, director of the Siam Intelligence Unit think tank.

"We'll see a continuation of the conflict, the standoff remains and the likelihood of more violence could increase."

The protesters say former telecoms tycoon Thaksin has subverted a fragile democracy with populist politics such as subsidies, cheap loans and healthcare to woo the poor and guarantee victory for his parties in every election since 2001.

Thaksin's critics also accuse him of disrespecting Thailand's revered monarchy, which he denies.

Thaksin has lived abroad since 2008 to avoid a jail term for a graft conviction he says was politically motivated. Critics say Yingluck is merely a stand-in for him.

Thaksin's supporters accuse the military and the establishment, including the judiciary, of colluding over the years to oust his governments.

The military, which has staged numerous coups since Thailand became a constitutional monarchy in 1932, overthrew Thaksin in 2006 but has stayed aloof this time.