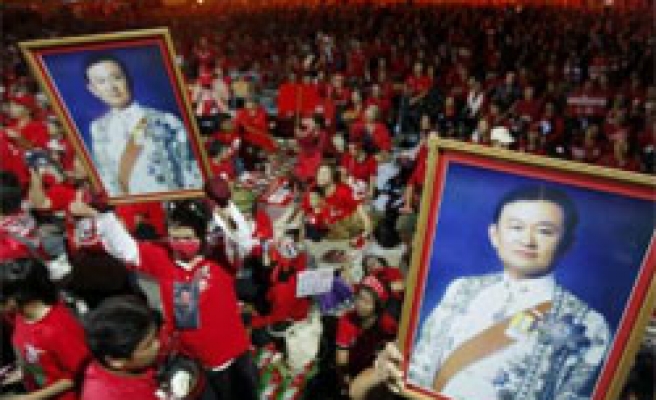 Thousands of Thai anti-government "Red Shirts" massed Sunday to mark four years since a coup ousted their hero Thaksin Shinawatra and to commemorate those slain in a May crackdown on their protests.

In their biggest show of strength in Bangkok since their rallies in April and May, during which 91 people were killed, police said about 6,000 Red Shirts gathered in the city's commercial centre, closely monitored by security forces.

Police estimated that 3,000 also massed in northern Chiang Mai city -- the former stronghold of fugitive former premier Thaksin, toppled from power in 2006 -- with some waving banners calling for the dissolution of parliament.

On Sunday, army-led command centres closely monitored events in both cities, but by early evening there was no sign of further violence as protesters began to disperse in the capital, where several thousand police had been deployed.

The red shirts aim to keep up the pressure on the government to end what they say are unlawful political detentions and broad media censorship. They have vowed to lay wreaths every week outside prisons holding the movement's leaders.

Sombat Boonngarm-anong, one of the new leaders who have emerged in recent months, called for the Bangkok rally to end before sundown because of security fears in the wake of a slew of mysterious grenade attacks in recent weeks.

"Our mission is now complete, it's now time to go home safely," he said on a loudspeaker.

A nine-week rally by the red shirts drew as many as 150,000 people at it's peak in March, with demonstrators demanding the dissolution of parliament and immediate elections. They rejected an offer of November polls, leading to military offensives to evict them.