Soontorn Rakrong, a spokesman for 14 groups based in the south, said some farmers in the world's top rubber producer had killed themselves because the government had failed to soften the blow from a collapse in rubber prices. 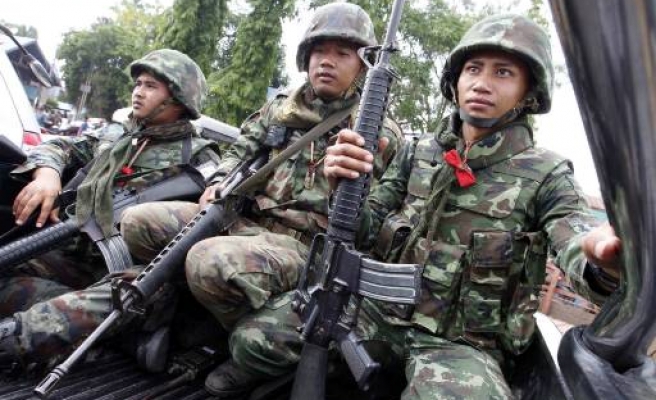 Thai farmers plan protests to force the military government to provide more support for rubber prices and will take to the streets this week in defiance of martial law, a spokesman for farmers' groups said on Monday.

Martial law has been in place since May and prohibits all protests and political gatherings of more than five people. The army staged a coup later in May to end months of political unrest.

Soontorn Rakrong, a spokesman for 14 groups based in the south, said some farmers in the world's top rubber producer had killed themselves because the government had failed to soften the blow from a collapse in rubber prices.

Weak demand, particularly from top rubber importer China, amid a supply glut has pushed global prices down to five-year lows. Thailand's benchmark unsmoked rubber sheet (USS3), which farmers sell to factories, was quoted at 43 baht ($1.30) per kg on Monday.

"Some people have hanged themselves because they can't stand it any more," Soontorn told Reuters. "The production cost is 65 baht per kg but the market price is 40 baht."

Deputy Agriculture Minister Amnuay Patisse said measures to push the price of USS3 rubber up to 60 baht per kg were under way. These include direct buying of rubber from producers, while the government has also promised handouts to farmers.

"We will start buying above market prices to push up rubber prices but I can't say when the price will reach 60 baht per kg," Amnuay told Reuters.

Thailand has sold 200,000 tonnes of rubber to China's Hainan Rubber Industry Group, Amnuay told Reuters on Monday, taking sales to the Chinese firm to over 400,000 tonnes in two months.

The deal will allow the Thai government to buy rubber from the market for sale later to Hainan. The government has previously said it would only intervene in the market if it had agreed sales deals, to avoid building up stockpiles similar to those accumulated through the generous subsidy schemes of the previous government.

Farmers are unhappy with the state's measures and are demanding that the government find ways to ensure they get 80 baht per kg for USS3 rubber, Soontorn said.

Rubber groups plan to demonstrate in the south on Tuesday while Soontorn will head to Government House in Bangkok with a few other representatives to try to speak to ministers.

He called for the removal of Finance Minister Pridiyathorn Devakula and Agriculture and Cooperatives Minister Pitipong Pungboon Na Ayudhya because of their failure to cushion the blow from the slump in prices.

Thailand, Indonesia and Malaysia, which produce nearly 70 percent of the world's natural rubber, agreed in November to "manage" exports to curb supply along with other measures to support the market, to little effect so far.

The military-led government postponed a debate on a draft rubber law last month after coming under pressure from farmers' groups to scrap the bill because, they said, it would do nothing to help smaller producers.

However, Amnuay said the draft would be reintroduced for debate in the National Legislative Assembly on Thursday.