More than 2,155 kilograms of raw tusks and carved trinkets were incinerated as authorities try to clamp down on illegal sales. 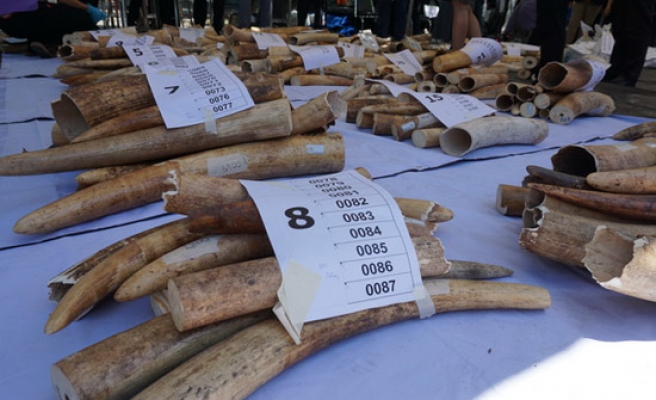 Thailand destroyed more than two tonnes of ivory Wednesday -- a victory for animal rights groups fighting against the trade in a country renowned for being a hub for illegal tusks.

The ceremony, in which 2,155 kilograms of raw tusks and carved trinkets were fed into an industrial rock crusher before being incinerated, was presided over by the Thai junta leader Prayu Chan-O-Cha and is the first time the kingdom has taken steps to destroy part of its stockpile.

"This is to show the Thai government's strong determination to oppose ivory trafficking and that Thailand will comply with international rule," he said during the ceremony.

They have pushed for Bangkok to destroy its stockpile to signal its determination to stamp down on the trade and avoid the risk of seized ivory finding its way back onto the black market through corrupt officials.

Trade in ivory was banned in 1989 under the Convention on International Trade in Endangered Species of Wild Fauna and Flora (CITES). But that has not stopped criminal gangs seeking to exploit a continued demand for tusks in Asia.

Ivory and other body parts of elephants are prized for decoration, as talismans, and for use in traditional medicine across parts of Asia with Thailand a key transit point.

The country's generals, who seized power in a coup last spring, have vowed to crack down on the illegal ivory trade.

Earlier this year, they ordered all Thais to register any ivory they owned, warning that those who failed to do so would see their items confiscated.

They have also made a series of high profile seizures including four tonnes of ivory found hidden in containers in April that originated in the Democratic Republic of Congo and was destined for Laos.

Thai police seized more than three tonnes of ivory a week later in a second haul, this time from Kenya that was again destined for Laos.

The ivory destroyed on Wednesday accounts for nearly all of Thailand's stockpile where criminal cases have been completed.

A further 540 kilograms has been donated to museums, government institution and universities to be used for educational and awareness raising purposes.