London-based Environmental Justice Foundation (EJF) said on Tuesday that Thailand was still failing to prevent trafficking and rights abuses in the fishing industry. 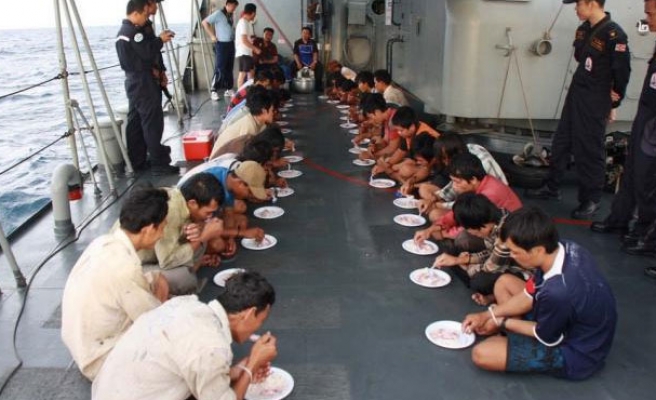 Thailand's efforts to combat human trafficking in its multi-billion dollar fishing industry have been "wholly inadequate", and it has failed to end officials' involvement in trafficking and labour abuses, a rights group said.

The U.S. State Department last year downgraded Thailand to its "tier 3" list of worst offenders - alongside 22 other countries including North Korea, Iran and Central African Republic - in its annual ranking of countries by their counter-trafficking efforts.

While Thailand's military-backed government said last month it was "confident" it had met the minimum standards to improve its ranking, the London-based Environmental Justice Foundation (EJF) said on Tuesday that the country was still failing to prevent trafficking and rights abuses in the fishing industry.

"Nothing that we have seen or heard in the last year indicates that Thailand has taken meaningful action to address the root causes of trafficking and abuse," EJF executive director Steve Trent said in a statement.

"The Thai government must take clear, significant and sustained steps to prevent and suppress human trafficking in the fishing industry."

EJF said in a briefing paper that Thailand was failing to enforce laws and crack down on corrupt officials involved in trafficking, and to identify victims of trafficking and forced labour aboard fishing vessels, even though it launched inspections at sea last year.

The government is also not protecting victims who have escaped or been rescued from modern-day slavery, EJF said, citing its interviews with victims who described threats at gunpoint and severe injuries from beatings by staff at government shelters designated to protect victims.

EJF pointed to media reports over the past year detailing Thai and Burmese trafficking victims being rescued, buying their freedom and swimming ashore after escaping from fishing boats.

It cited the Thai-language newspaper Thai Rath reporting in November a case of two Thai children, 13 and 15 years old, being rescued from forced labour aboard a vessel operating out of Ambon, Indonesia.

A month later, Thai Rath reported that exploited workers aboard a Thai-owned fishing vessel in Iran had contacted journalists to request government help to return home.

EJF said Thailand has also not addressed the unregulated industry of labour brokers, whom the private sector has cited as the main facilitators in trafficking and abuse of migrant workers.

"Based on these failures and the ongoing occurrence of systematic trafficking and abuse in the fishing industry throughout the last year, EJF strongly recommends that Thailand remain on tier 3 in 2015," EJF wrote in the paper, calling for the government to implement substantive action and reforms.

Thai officials contacted by phone and email did not immediately comment on the report.