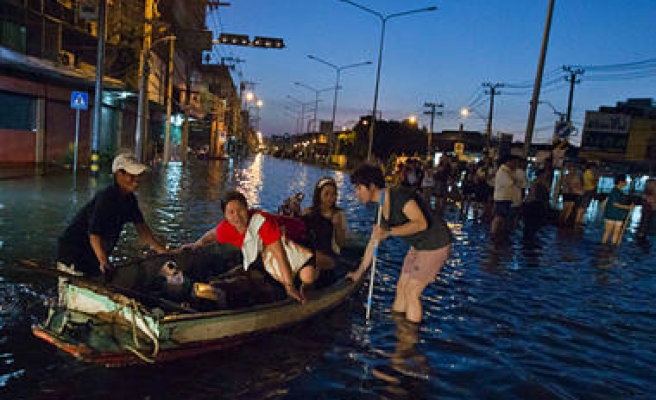 Flooding at an industrial estate east of the Thai capital has forced the closure of 2 foreign-owned factories producing electronic spare parts, but the estate's operator said other plants there had no plans to halt operations.

Thailand is the world's largest producer of hard-disk drives and a big supplier of electronic components and car parts, and devastating floods in 2011 hit some of the world's biggest manufacturers, delaying shipments and disrupting supply chains.

"The factories notified us that they will suspend operations for two days because some workers are finding it difficult to travel to work," said Executive Director Wibun Krommadit, but he declined to identify the companies.

"No other factories have notified us of plans to close."

The estate was pumping flood water out of the margins of its premises and would be dry within a day's time, he added.

Amata Nakorn estate, spread over 3,020 hectares (7,459 acres), is home to companies producing parts for Japanese automakers. Nearly half the factories there hail from Japan.

Floods this year have hit 28 out of 77 Thai provinces and 36 people have been killed, disaster prevention officials say. More than 3 million people have been affected by flooding since July.

By contrast, more than 800 people were killed in the floods of 2011, which caused huge disruptions to industry, cutting economic growth that year to just 0.1 percent.

Authorities say flood waters this year are moving in a direction different from that of 2011, when they flowed towards Bangkok from the north.

Runoff from the north was heading towards eastern provinces and could affect some industrial parks there, said Irrigation Department chief Lertwirot Kowatthana. "There might be some impact, but we believe it will be very limited," he added.

The 2011 floods swamped seven industrial estates in Thailand's central region, but many of the estates affected then say they are now better equipped to handle flooding.

"We have built a 5-metre high flood barrier as a precaution and can add an extra 1 m to the barrier if needed. In 2011 flood water reached 4.30 m at our estate but we're not expecting anything near that," Sujin Wassanit, a senior manager of Bangkadi Industrial Park, told Reuters.

The park is home to Toshiba Corp's main production centre in Southeast Asia, and factories there make home appliances, semiconductors and lighting products.

In 2011 Toshiba had to halt production at nine plants at the Bangkadi Industrial Park and another at the Nava Nakorn estate, both in Pathum Thani province north of Bangkok.

Since the 2011 floods Prime Minister Yingluck Shinawatra's government has kicked off an $11 billion effort to stiffen flood defences but the project has hit legal roadblocks.