Voting in 13 of Bangkok's 33 constituencies was disrupted. Thirty-seven out of 56 constituencies in the south, where opposition to the government is also strong, suffered disruption. 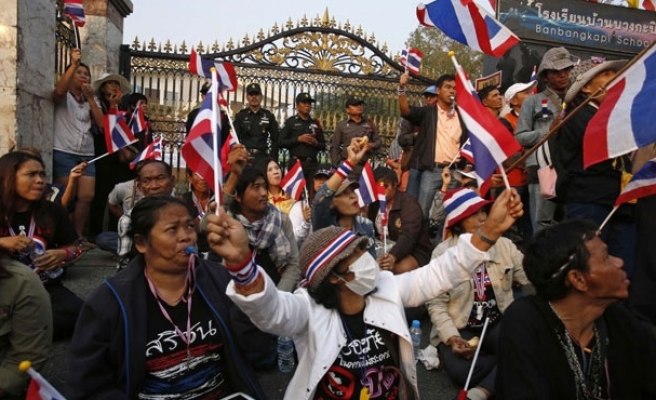 World Bulletin / News Desk
Thailand went to the polls under heavy security on Sunday in an election that could push the divided country deeper into political turmoil and leave the winner paralysed for months by street protests, legal challenges and legislative limbo.

Apart from a few scuffles voting was relatively peaceful, a day after seven people were wounded by gunshots and explosions during a clash between supporters and opponents of embattled Prime Minister Yingluck Shinawatrain a north Bangkok stronghold of her Puea Thai Party.

Voting ends at 3 p.m. (0800 GMT), but no results will be announced on Sunday. Further voting is already scheduled for Feb. 23 after problems with advance voting last Sunday, while the ballot in some southern areas may not happen for weeks.

Voting in 13 of Bangkok's 33 constituencies was disrupted. Thirty-seven out of 56 constituencies in the south, where opposition to the government is also strong, suffered disruption. Polling elsewhere in the country was unaffected.

"The situation overall is calm and we haven't received any reports of violence this morning," National Security Council chief Paradorn Pattanatabutr told Reuters. "The protesters are rallying peacefully to show their opposition to this election."

An election official was killed with three soldiers in a bomb attack in Pattani province but police said that was related to the insurgency in the deep south rather than the national vote.

"Blocking polling booths and intimidation of ordinary people who want to vote is completely unacceptable," she said. "We condemn what is happening in Bangkok and the south. The protesters cannot block people from exercising their right to vote."

The usual campaign billboards, glossy posters and pre-election buzz have been noticeably absent, as will be millions of voters fearful of violence or bent on rejecting a ballot bound to re-elect the political juggernaut controlled by Yingluck's billionaire brother, Thaksin Shinawatra.

The main opposition Democrat Party boycotted the poll and the Election Commission has already voiced concerns that it would result in too few legitimately elected MPs to produce a parliamentary quorum.

Thaksin, 64, is loved and loathed in Thailand, but his parties have won every poll since 2001. His opponents say he is a corrupt crony capitalist who rules by proxy from self-exile in Dubai.

"We're not blocking the election. We're postponing it," said Nipon Kaewsook, 42, one of the hundreds of protesters blocking Ratchathewi District Office in central Bangkok to prevent the distribution of dozens of ballot boxes.

"We still need an election, but we need reform first," added Nipon, an English teacher from Phattalung insouthern Thailand.

Protesters shouted "Yingluck get out!" and "Thaksin go to jail!" They took celebratory 'selfies' in front of the ballot boxes, placed in a car park at the back of the building.

Victory celebrations for Yingluck would probably be muted. With parliamentary seats unable to be filled, she could find herself on shaky ground, exposed to legal attacks and unable to pass bills and budgets crucial to reviving the economy.

Yingluck had refused to postpone the election, even though a fifth of those registered for advance voting were unable to cast ballots after protesters blocked polling stations in 49 of 50 Bangkok districts as part of a shutdown of key intersections.

In 28 southern constituencies, no votes will be cast because no candidates could sign up.

Anti-government demonstrators say Thaksin subverted Thailand's fragile democracy by entrenching money politics and using taxpayers' money for generous subsidies, cheap healthcare and easy loans that have bought him loyalty from millions of working-class Thai voters in the north and northeast.

With broad support from Bangkok's middle class and tacit backing of the royalist establishment, old-money elite and military, the protesters reject the election and want to suspend democracy, replacing it with an appointed "people's council" to reform politics and erode Thaksin's influence.

The latest round of tumult in the eight-year political conflict erupted in November and underscored Thaksin's central role in the intractable struggle, both as hero and villain.

Yingluck was largely tolerated by Thaksin's opponents but her party miscalculated when it tried to introduce a blanket amnesty that would have nullified a graft conviction against Thaksin and allowed him to return home.

Many Thais see history repeating itself after a cycle of elections, protests and military or judicial interventions that have polarised the country and angered Thaksin's "red shirt" supporters, who held crippling blockades in 2010 and have vowed to defend his sister from any overthrow attempt.

Thailand's military has remained neutral so far, but the judiciary has taken on an unusually large number of cases in the past two months in response to complaints against Yingluck and Puea Thai that could result in the party's dissolution and lengthy bans for its top politicians.

There is also a chance the election could be annulled, as it was in 2006, over a technicality. The Election Commission is braced for a deluge of complaints and challenges.

With no quorum to re-elect a prime minister, it looks likely Yingluck could be a caretaker premier for months. Even with a fresh mandate, a stalemate is almost certain, giving her opponents more time to intensify their campaign against her and for legal challenges to be lodged.