Thai PM, Election Commission agree to hold new vote in July despite the opposition's reluctance to say whether it will take part 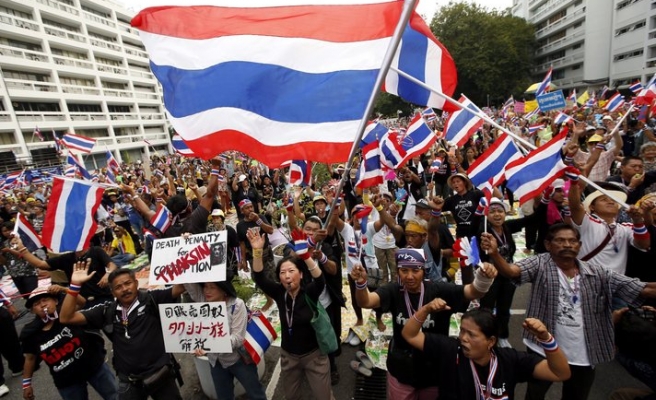 Thailand's Election Commission and the prime minister agreed on Wednesday to hold a general election in July, but anti-government protesters who disrupted a vote in February said they still wanted to see electoral reforms before a new poll.

The protesters have been trying to oust Prime Minister Yingluck Shinawatra since November, part of a long-running crisis that broadly pits Bangkok's middle class and royalist establishment against the mainly poor, rural supporters of Yingluck and her brother, former premier Thaksin Shinawatra.

"The prime minister and the Election Commission agree on a July 20 election," Puchong Nutrawong, secretary-general of the commission, told reporters after a meeting with Yingluck.

He said the commission would ask the government to issue a royal decree and get the king's endorsement for the vote. The cabinet, which must also sign off on an election, would probably consider the decree next week, he said.

The main opposition Democrat Party, which boycotted the vote in February, was noncommittal about its participation in a new election.

"Right now, we are not thinking about this. There is time still, let me propose an exit strategy for Thailand first," Democrat leader Abhisit Vejjajiva told Reuters, referring to his effort to steer the country out of nearly a decade of strife.

Abhisit, as part of his mediation effort, is calling for talks between the protagonists and for a political reform process to take place alongside a general election, although his efforts have met with scepticism.

"I will outline a way out for Thailand and put it to the public. This will take one or two days," Abhisit told reporters earlier, adding he would be sending proposals to Yingluck and protest leader Suthep Thaugsuban.

The overriding aim of the anti-government protesters is to eliminate once and for all the influence of Thaksin, a former telecoms tycoon who swept to political power with populist policies such as free health care and loans for the poor.

His enemies say he is an authoritarian, corrupt crony capitalist and he was toppled by the military in 2006. He denies corruption and lives in exile to avoid a jail sentence handed down in 2008 for abuse of power.

The protesters say he is the power behind his sister's government and they also accuse him of harbouring republican sympathies, which he denies.

Parties led by or allied to Thaksin have won every election since 2001 and the protesters want reform of the electoral system to break what they see as his grip on a fragile democracy.

Suthep, in a speech to supporters in a Bangkok park later on Wednesday, breathed defiance and said his position on an election had not changed.

"We refuse to bargain with the devil that is the Thaksin regime ... we reject the Yingluck administration," said Suthep vowing to launch a new round of protests on May 14.

The Constitutional Court nullified February's election because of rules that stipulate the vote must be held on the same day across the country. Voting was not held in 28 constituencies because candidates were stopped from registering by Suthep's protesters.

The protesters have at various stages blocked thoroughfares in Bangkok, forced ministries to close and clashed with police, scaring off tourists, denting business confidence and damaging Southeast Asia's second-biggest economy.

The central bank has warned that the economy could contract in the first quarter compared with the previous three months and some economists fear the country could slip into recession unless the deadlock is broken and a new government installed.

Thammarat Kittisiripat, an economist with TMB Bank, gave a guarded welcome to news of an election date.

"It will be good for sentiment but we don't think there will be any immediate impact on the economy. Whether this election will really be held or whether it will bring a government acceptable to all is still a big question," he said.

Yingluck's party would probably win a new election, given the staunch support the Shinawatras command in the populous north and northeast and among the urban poor.

Yingluck has led a caretaker government with limited powers since dissolving parliament in December and it is possible she may be forced out of office before the election is held. She faces multiple legal challenges including charges of abuse of power for her transfer in 2011 of a National Security Council chief.

If found guilty, she could be removed from office. She has until Friday to present her defence to the Constitutional Court.

She is also accused of negligence over a loss-making rice subsidy scheme that critics say was riddled with corruption.

Those charges were brought against her by the National Anti-Corruption Commission. If it recommends impeachment, the case would go to the Senate.

"Red shirt" supporters of Thaksin and Yingluck have vowed to defend the caretaker premier if she is removed and are planning a big rally on the outskirts of Bangkok on May 6 ahead of the legal decisions.

That has raised fears of clashes between pro- and anti-government activists.