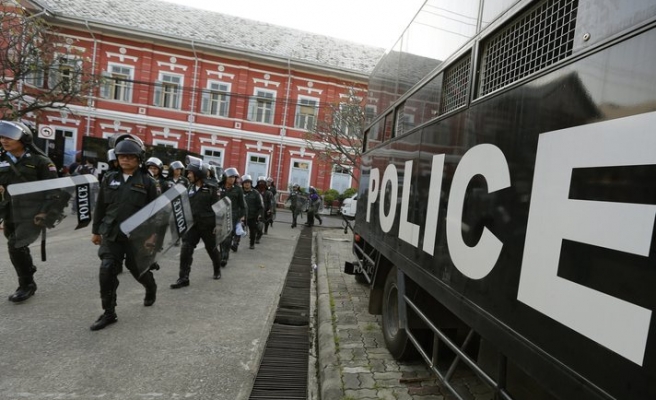 Thailand's military government said on Monday it had begun an overhaul of the electoral system following an announcement by junta leader General Prayuth Chan-ocha that polls could take place by late 2015.

The military took power on May 22 in a bloodless coup following six months of street demonstrations that contributed to the ousting of Prime Minister Yingluck Shinawatra. A court had already ordered her to step down after finding her guilty of abuse of power on May 7.

Permanent secretary for defence Surasak Kanchanarat said political party reform, decentralisation of power and "investigations and penalties for those groups that commit electoral fraud" were top on the military's agenda.

"We will talk about obstacles to an election and corruption," Surasak told reporters ahead of a meeting later on Monday with the Election Commision.

The junta, formally known as the National Council for Peace and Order, has scrapped the constitution and its leader, General Prayuth Chan-ocha, said on Friday that a new, temporary charter would be ready in July.

The army chief said this would allow an interim cabinet to be installed by September and a reform council would then start work on a longer-term constitution.

He also said in his weekly televised speech that a general election could be held around October 2015, the firmest date he has given until now.

The United States and European Union downgraded diplomatic ties with Thailand after the coup. Washington has called for a quick return to civilian government and a move toward "free and fair elections".

The junta's plans for sweeping electoral reforms echo demands made by the anti-government demonstrators who hounded Yingluck. They wanted reforms before a new election and disrupted a Feb. 2 vote that was later annulled by a court.

Yingluck's government and the Election Commission, which was accused of bias by Yingluck's supporters, failed to agree on a new election date prior to the military seizing power.

The toppling by the army of her brother, former premier Thaksin Shinawatra, in 2006 ignited a long-running struggle between the conservative middle-class and Thaksin's largely rural supporters. The military has said it wants to put an end to Thailand's often violent political cycle.

The protesters accused Thaksin, who lives in self-imposed exile abroad to avoid a corruption sentence handed down in 2008, of rampant vote-buying and said they wanted to eliminate his "toxic" political influence.

The junta has widened a purge of Thaksin-linked government officials. On Friday, it announced a reshuffle of senior civil servants, transferring 10 Thaksin allies to inactive posts, including Tarit Pengdith, chief of the Department of Special Investigation, the equivalent of the U.S. FBI.

Anti-coup protests have largely dwindled in recent weeks and the few that dare show dissent in public have been promptly detained by police and soldiers.

In its latest public-relations effort, the junta displayed more than 1,000 weapons on Sunday it said were seized from political activists, including Jakrapob Penkair, a former government minister with Thaksin links who has established a movement in exile to oppose the coup.

In a Facebook post, Jakrapob denied any link to the weapons, saying his campaign was one of non-violent civil disobedience.

The military said on Monday it was revoking Jakrapob's passport and that of five others, including Charupong Ruangsuwan, a former interior minister and ex-leader of Thaksin's Puea Thai Party, who helped form the anti-coup movement.

The foreign affairs ministry said it was looking at ways to bring Jakrapob back. He is thought to be in Hong Kong, which has no extradition treaty with Thailand.