While some watch from beaches and hilltops or say eclipse prayers, others cower in fear believing sun is being eaten by mysterious dragon 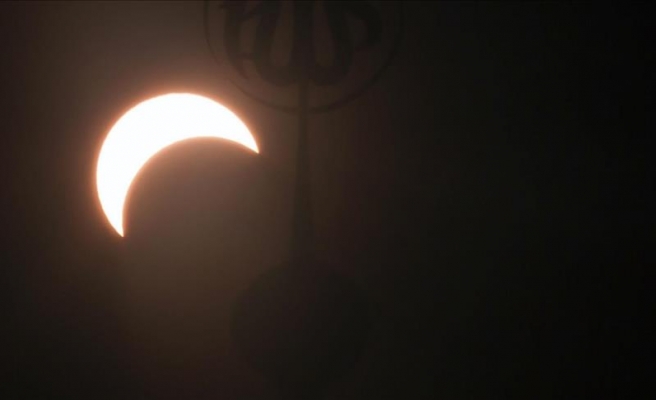 Thousands of people across the world's most populous Muslim nation flocked to the regions of Sumatra, Borneo and Sulawesi early Wednesday for the chance of being plunged into complete darkness -- the country's first total solar eclipse in nearly 33 years.

At 6.19 a.m. (2319 GMT Tuesday), Indonesians cheered as the Moon started to pass directly in front of the Sun, many of them then falling silent in awe.

As the sun reappeared -- on average around 2-1/2 minutes later -- some onlookers reached for their camera phones and raised them to the skies, while others clapped quietly.

Gholib -- a self professed eclipse hunter, who observed the moon's passing from Belitung Island in the Java Sea -- told Anadolu Agency that people waited for hours at packed observation spots, where local actors put on performances.

"It got cloudy for a while, but we got to enjoy the dark for around two minutes," he said.

Some Indonesians in remote areas, however, stayed indoors, believing that an eclipse occurs when a notorious dragon eats the sun.

In Ternate City -- one of the last cities in the eclipse's path -- the local government late Tuesday set up about 600 tall kentongans -- traditional drums made from bamboo -- to be hit simultaneously when the eclipse occurred.

They believe that the sun is regurgitated when the dragon gets frightened -- too scared to return for another 30 or so years, when the country's meteorological agency says the next eclipse will occur.

A solar eclipse occurs when the moon casts a shadow on the earth as it passes between the earth and the sun. A partial solar -- more frequent than the total -- is when the earth passes within the penumbra of the moon.

Budi Romadhoni told Anadolu Agency by phone that he witnessed 80 percent of the total eclipse in Semarang, the port city of Central Java.

He along with thousands of other Muslims gathered in mosques to perform "Sholat Gerhana" -- a special prayer done at the time of the eclipse also known as khusuf.

Some of those who remain indoors, however, are next scared of the dragon; they do it because of an edict from a time long past.

Dictator Suharto told -- who ruled from 1967 until 1998 -- told his people that viewing such an event would make them go blind.

"No one went out, all of them stayed at their home," 52-year-old Lasdi told Anadolu Agency by phone of his fellow villagers.

"The edict was issued in 1983, when a total solar eclipse spread across the island of Java."