Hong Kong urged pro-democracy protesters to pack up their tents and leave their main camp near government headquarters, saying it could not promise there would be no "confrontations". 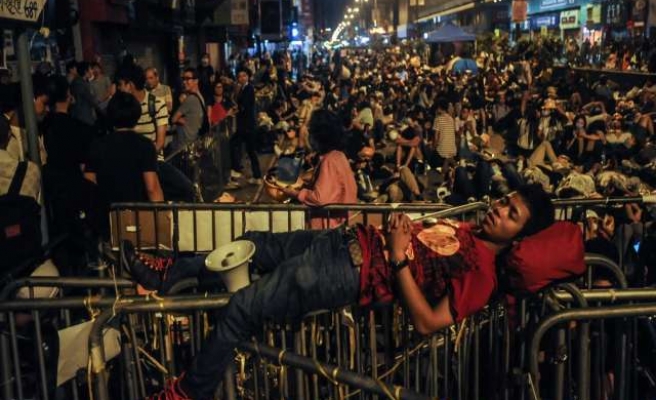 Over 10,000 protesters massed at a major pro-democracy protest site on Wednesday evening, even as authorities warned people to stay away, before the final clearance of the main 'occupy' camp the following morning.

Hong Kong urged pro-democracy protesters to pack up their tents and leave their main camp near government headquarters, saying it could not promise there would be no "confrontations".

Thousands of police will move in on the site in Admiralty, next to the Central business district, after two-and-a-half months of road blockades and sporadic violent scuffles in the former British colony.

The protests represent the most serious challenge to China's authority since the 1989 pro-democracy demonstrations and bloody crackdown in and around Beijing's Tiananmen Square.

"We can't guarantee there won't be any confrontations," Chief Secretary Carrie Lam, Hong Kong's number two official, told reporters. "I appeal to the protesters who have been illegally occupying our roads to pack up their belongings and to leave the protest sites."

The Admiralty site has stood as a poignant symbol of calls for democracy that have been spurned by the government and Communist Party rulers in Beijing.

"Our aim is to let the world see what we demand and most importantly, that Hong Kongers can unite," said protester Kenneth Kan.

Over 10,000 people crammed into the Admiralty protest area on Wednesday. They cheered and clapped to speeches from student leaders such as Lester Shum, who said the civil disobedience campaign for full democracy wouldn't end with the clearance, but would take on new forms.

Some packed up their tents and provisions on Wednesday, but thousands of protesters still lingered at the site, hunkered down for a final showdown with police in the morning -- brushing off concerns of arrest or violence.

Others scrambled to preserve the "Umbrella Movement" artwork or snapped "selfies" and pictures on phones and cameras in what was a defiant, valedictory night for perhaps the boldest stand against China's Communist Party leaders over democratic rights in more than twenty years.

"I came here sometimes after work, but this is the first time for my son," said Alice Leung, accompanied by her nine-year-old. "He has seen the movement on TV, but I want him to experience it himself so that he will understand better when he grows up and understand what democracy is."

Hong Kong Federation of Students leader Alex Chow said his group and Scholarism, the other main student group backing the protests, were urging everyone who had participated to return to Admiralty on Thursday morning in an act of civil disobedience.

"Some will fight back. Some will sit down and wait to be arrested," said Johnny Chung, a 20-year-old student. "The government is ridiculous. Over 100,000 people came here and slept on the street ... and this government did nothing."

Describing tactics similar to those used to clear another protest site in the Mong Kok district two weeks ago, the sources said workers and bailiffs would first clear the areas subject to the court injunction, then come from multiple directions, cordon off the protest area and clear all barricades, tents and people in the roads. They may arrest those who refuse to leave.

Causeway Bay will be cleared after Admiralty, either on Thursday or Friday, the sources said.

Hong Kong returned to China in 1997 under a "one country, two systems" formula, allowing it some autonomy from the mainland and a promise of eventual universal suffrage. Beijing has allowed a vote in the next election for leader in 2017 - but insists on screening the candidates first.

The Umbrella Movement, named after the items protesters used to defend themselves from pepper spray and batons, is demanding a fully democratic election with open nominations.

Admiralty is where police fired tear gas at tens of thousands of protesters in late September. That galvanised scattershot protests into a longer-term movement, complete with a sea of colourful tents, democracy-themed artwork and statues, makeshift classrooms and food and medical stations.

"We'll be back," proclaimed a large yellow banner hung along one of the pedestrian bridges. "Though we are disappointed, we must not give up hope," said another.

"This movement is incredibly important," said Rose Tang, one of the student activists during the 1989 Beijing protests. "They are making history."

But she urged protesters to depart without bloodshed.

"Don't be a martyr, it is not worth it. Don't try to be a tank man," she said, in reference to a lone man who blocked a line of tanks near Tiananmen Square after the 1989 military crackdown.