The crowd, which police estimated to have climbed to 25,000 by the evening, included many middle-class office workers and students. 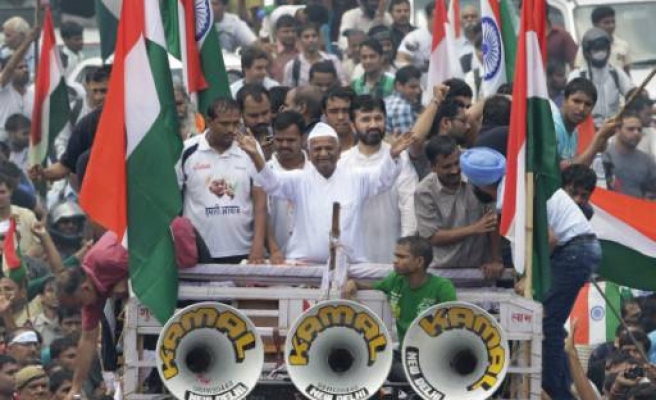 At least 20,000 people gathered on Saturday to support an anti-corruption social activist who has galvanized much of India against the government with his hunger strike, amid signs from Prime Minister Manmohan Singh of compromise to end the impasse.

Anna Hazare, a 74-year-old self-styled Gandhian activist lay on a stage on his fourth day of fasting at an open ground in the capital, a hunger strike he says which will continue until the government passes tougher anti-graft legislation.

The crowd, which police estimated to have climbed to 25,000 by the evening, included many middle-class office workers and students.

"We believe we have got independence but we haven't. The same corruption, same loot(ing), same terror is going on," Hazare told the crowd, adding that India needed electoral reforms as well as a new corruption bill.

Hazare left jail on Friday, to huge cheering crowds and widespread media coverage. He had been briefly arrested on Tuesday, but then refused to leave jail until the government allowed him to continue his public fast for 15 days.

Hazare's campaign has struck a chord with millions of Indians, especially the expanding middle-class sick of endemic bribes, and has become a thorn in the side of Prime Minister Manmohan Singh as his government battles corruption scandals.

There were signs the government, which has its own anti-corruption bill in parliament, was looking for a compromise to the hardline stance it took earlier in the week. Parliament published adverts in newspapers on Saturday asking for public input to the anti-graft legislation.

"We are open to discussion, dialogue," Singh told reporters on Saturday. "There is a lot of scope for give and take."

One of India's first female police officers and among Hazare's main supporters, Kiran Bedi, told Reuters that they are not against discussing provisions of their bill with the government.

"We have heard such statements before, but in concrete terms we do not know what it means," said Bedi.

"We would be willing to show flexibility."

Several scandals, including a telecoms bribery scandal that may have cost the government up to $39 billion, led to Hazare demanding anti-corruption measures. But the government bill creating an anti-graft ombudsman was criticised as too weak.

For many, the pro-Hazare movement has highlighted the vibrant democracy of an urban generation that wants good governance rather than government through regional strongmen or caste ties -- a transformation that may be played out in 2012 state polls that will pave the way for a 2014 general election.

"The times when you could rule India without its urban middle class are now over," wrote commentator Shekhar Gupta in The Indian Express.

A weak political opposition means that the government should survive the crisis, but it could further dim the prospect for economic reforms and hurt the Congress party electorally. Some commentators also said the pro-Hazare movement may die down now that he is no longer in jail.

Dressed in his trademark white cap, kurta and spectacles, the slight 74-year-old Hazare has evoked memories of independence leader Mahatma Gandhi, who is revered as the father of the nation.

A medical team is on standby to monitor Hazare's health. A sharp deterioration in his condition could further worsen the crisis for the government, although his supporters say it is not a fast-to-death.

The protests, fanned by social networks, have not only rocked the ruling Congress party, they have sent shockwaves through the political class as a whole. There were more than 500 separate protests across India on Friday, local media reported.

Hazare is not some out-of-the-blue phenomenon, however. Deep-seated change has been under way for years in India as its once-statist economy globalises, bolstered by a widely used freedom of information act, aggressive private media and the election of state politicians who have rejected traditional caste-support bases to win on governance issues.

Singh, 78, who is widely criticised as out of touch with his people, has dismissed the fast by Hazare as "totally misconceived" and undermining the parliamentary democracy.

Hazare went on hunger strike in April which he called off after the government promised to introduce a bill creating an anti-corruption ombudsman. The so-called Lokpal legislation was presented in early August, but activists slammed the draft version as toothless because the prime minister and judges were exempt from probes.