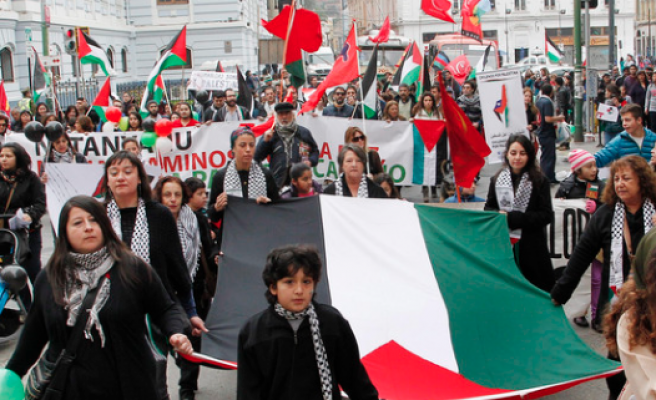 Thousands of people in the U.S. state of Chicago marched and protested through downtown on Thursday night, voicing their disagreement with President Donald Trump’s decision to recognize Jerusalem as the capital of Israel.

The demonstrators gathered in front of the Federal Plaza, carrying the giant Palestinian flag and placards written, "Jerusalem, Red Line", "U.S. and Israel, pull your hand off Jerusalem" and "Trump / Pence regime must go”.

Following the speeches, the group marched through the main street chanting slogans "Freedom for Palestine", "Jerusalem is the capital of Palestine, not of Israel " and "Donald Trump should go."

Despite the cold weather of six degrees below zero, the group marched for hours on the city streets until they reached the Israel’s Consulate General building.

The demonstration, which was staged amid intense security measures, ended without incident.

Trump on Wednesday announced his decision to recognize Jerusalem as Israel’s capital, despite widespread international opposition.

He also told the U.S. State Department to begin preparations for relocating the U.S. embassy in Israel from Tel Aviv to Jerusalem.