Thousands march in Kashmir for freedom during Eid Al Fitr-PHOTO 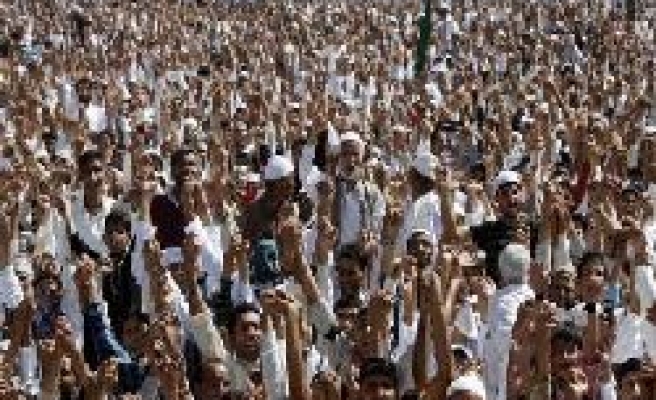 Police fired tear gas and live ammunition into the air to disperse crowds in Srinagar, the heart of a 20-year struggle against New Delhi's occupation of the region.

Three-month-long protests have killed 70 people so far, mostly stone-throwing protesters amid a series of civilian deaths blamed on the heavy-handedness of security forces. The protests have shown no sign of abating as the violence by the secutity forces continues.

After special Eid prayers to mark the end of the Ramadan fasting month, tens of thousands people poured into the streets from mosques in Srinagar, Kashmir's summer capital, waving green Islamic flags and chanting "There is no God but Allah" and "Go India, go back."

The main demonstration was led by the region's senior leader Mirwaiz Umar Farooq.
India arrested a prominent Kashmiri leader, Chairman of Hurriyat Conference, Syed Ali Shah Geelani on Wednesday to prevent him from offering prayers in Hazratbal on Eid-ul-Fitr.

Hundreds of trucks and buses brought people, many of them sitting on roofs and hanging out of windows, for Eid prayers which later turned into an independence rally.

"The law of jungle was prevailing in Kashmir and the troops were randomly killing Kashmiri youth to frighten people to submission," Farooq said. "But our struggle will continue."

The killings of civilians have fuelled anger in Kashmir, a Himalayan region where sentiments against New Delhi's rule run deep.

Authorities deny any systematic violations and say all reports are "investigated".