At least 50,000 people gathered on Sunday to support Hazare, who is demanding a tough anti-graft law. 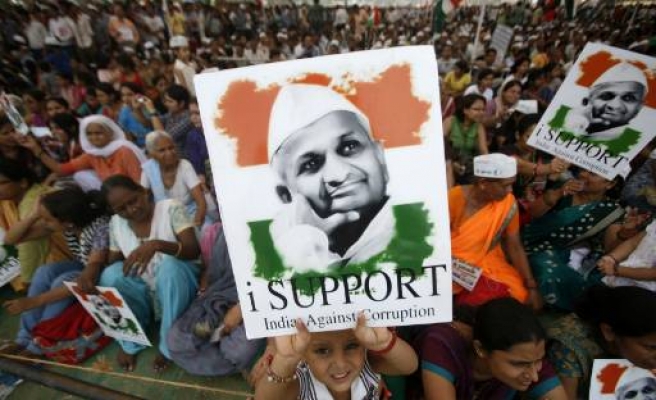 An Indian anti-graft activist whose hunger strike has galvanised millions to hold the biggest protests in decades appeared on Sunday ready to end a standoff with the government, saying he was open to dialogue.

At least 50,000 people gathered on Sunday to support Hazare, who is demanding a tough anti-graft law.

But Hazare's insistence that the government introduces this bill on Tuesday and passes it by the end of this month has sparked criticism that his group was dictating policy to an elected parliament, putting pressure on him to compromise.

"We have not closed the door of dialogue. We have kept it open. Only through dialogue the issues can be resolved," Hazare told supporters at an open ground in the capital on the sixth day of his fast.

Protesters chanted "Anna, you keep fighting, we are with you," and "Hail mother India".

Hazare's campaign has found resonance with millions of Indians, particularly the middle classes tired of endemic bribes and a series of corruption scandals that have touched top politicians and businessmen in Asia's third largest economy.

But critics of Hazare's hunger strike, who include novelist and social activist Arundhati Roy, say he is setting a precedent by holding democratic institutions hostage.

"The danger is if we get rid of these institutions and say that discussions will happen outside parliament, then tomorrow there can be a mobilisation of any kind of extremist group," renowned social activist Aruna Roy told CNN-IBN TV.

Roy's civil rights organisation, the National Campaign for People's Right to Information (NCPRI), said it would introduce its own anti-graft bill to parliament.

On Saturday, Singh, widely seen as out of touch and leading a graft-riddled, fumbling government, took the initiative for the first time during the fray with Hazare and said the government was willing to talk.

A ruling Congress party lawmaker also sent Hazare's bill to a parliamentary committee for consideration, meeting a demand of the protesters.

Hazare was briefly jailed on Tuesday in a bid to prevent him from massing support for his fast, but he refused to leave prison until the government allowed him to continue his vigil, in public, for 15 days. He was released on Friday to huge cheering crowds and widespread media coverage.

The activists' supporters say he will not fast to the death but a medical team is on hand to monitor his condition. Hazare has carried out scores of hunger strikes to pressure governments over social issues in the last few decades.

For many, the pro-Hazare movement has highlighted the vibrant democracy of an urban generation that wants good governance rather than government through regional strongmen or caste ties -- a transformation that may be played out in 2012 state polls that will pave the way for a 2014 general election.

"Over the past five years corruption hasn't necessarily changed but attitudes have. We have now reached a breaking point of no return. Enough is enough and we want change," said Sanjeev Sahay, 39, a litigation lawyer in Delhi, who had come to support Hazare with his children.

Several scandals, including a telecoms bribery scam that may have cost the government up to $39 billion, led to Hazare demanding anti-corruption measures. But the government bill creating an anti-graft ombudsman was criticised as too weak as it exempted the prime minister and the judiciary from probes.

A weak political opposition means that the government should survive the crisis, but it could further dim the prospect for economic reforms and hurt the Congress party in elections.

The main Hindu nationalist opposition Bharatiya Janata Party is organising a nationwide protest against the government on Thursday, while a group of left parties is planning a national protest on Tuesday.